Hot Hot Heat: Music, Gender and Race in The Heat 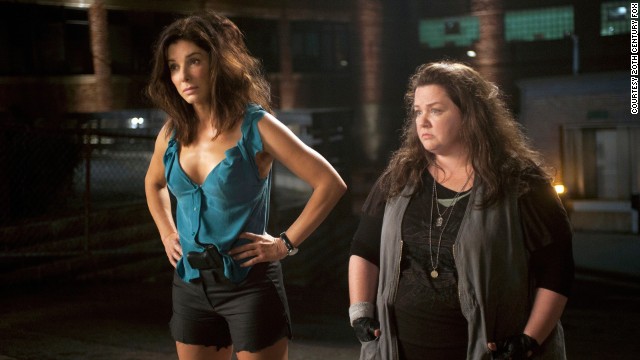 As you probably guessed from the title, I recently saw The Heat. The movie is not without its flaws; there were definitely some examples of problematic humor. While that’s seems to often be par for the course in raunchy comedies, it’s something that shouldn’t be ignored. Still, it’s possible to look at entertainment with a critical eye while still enjoying the experience overall. And I enjoyed myself. Rude humor coming from two lead female characters? PROGRESS! And the love interest is a person of color? PROGRESS! And so is the head of the FBI…PROGRESS!

While there was plenty of PROGRESS™ to go around in the movie, there were also hot beats to boot, and that’s really what I’m hear to talk about. The soundtrack for the film had its highs and lows, but it did have one of my favorite things: lady rappers. Unfortunately, less than half of the track list features female artists, but when it does, you notice. It’s an interesting subversion of the common action cop trope where “ballsy”, male driven rock and hip-hop are used to bolster swagger heavy scenes and on-screen fights.

The specific choices of music in the film were subtle, but really struck me. The movie opens with a title sequence reminiscent of 70’s era buddy cop shows, with The Isley Brothers’ “Fight The Power” playing over it. That’s how I knew I was either entering into something really great, or really awful. I was holding onto “really great” until proven otherwise, and I was mostly not disappointed.

Melissa McCarthy’s loose cannon character Detective Mullins is introduced with Angel Haze’s “Werkin’ Girls”, which is a hot track – and even hotter video – more than worthy of a prime spot in an action oriented film. That’s something it probably never would have gotten if it weren’t for this movie, or it certainly wouldn’t be expected to preface a character even remotely like Mullins.

Then, things get weird.

We go from 70’s counterculture anthem, to aggressive Black female MC…to Ted Nugent. Now, I try to keep my personal opinions out of movie soundtracks (remember, try does not mean I always succeed), but I like to see a mostly cohesive, thematic resonance through the music of a film, even without the picture to support it. Unfortunately, The Heat doesn’t deliver that. I also thought it was odd to have noted racist, sexist, and general scuzzbucket Ted Nugent right in the middle of a soundtrack featuring mostly urban (and if not urban, then urbane) tracks. The same way it’s weird to have him provide backdrop in the middle of a movie about confident, self-sufficient, empowered female characters. It’s incongruous, to say the least, and it’s also not the only such example in the movie. Maybe, if they wanted a driving hard rock sound, they could have gone with Heart, Joan Jett, Lita Ford, or Blondie instead.

We move from Nugent’s “Stranglehold” into Boston’s “More Than A Feeling”. While the track isn’t quite cohesive with the bulk of what’s going on, musically, the film IS set in Boston, so why not be cute about it, right? (If you want to see another great example of tongue in cheek track usage, definitely check out the soundtrack from 2009’s Star Trek.)

After that, we sort of get into a groove with LCD Soundsystem, a dance remix of Parliament’s “Flashlight”, and Santigold. Sadly, we fall into a Kreayshawn pit soon after that. Why is that a problem? Let me put it this way: this is just a continuation of why the Ted Nugent track was a slobber covered curveball nobody wanted. Kreayshawn is a female MC, sure, but she is also a culturally appropriative, racially insensitive one, and it doesn’t cancel out.

That mess is followed by a throwback triple play of Dee-Lite, Luther Vandross, and Air Supply, all part of an A+ montage. (I’ll allow it.) Then we get into what my dad keeps telling me is the standout track, “Lonely Town, Lonely Street” by Bill Withers, followed by April Wine. I would chalk up them up to that whole Boston feel, but they’re Canadian, so, go figure with that one. I won’t call it an A+ choice but it’s nowhere near as egregious as Nugent’s inclusion.

The finale gives us two great moments, with Azealia Banks and Kimbra, the former being the perfect hook for a strut into battle, and the latter an ideal mix of pop and funk to really get the blood going (and with strings reminiscent of 70s and 80s cop dramas). The Banks track chosen for the movie is the well known “212”, which I love. Unfortunately, the way they bleeped out – let’s call it “the c-word” – has left an otherwise driving, badass scene a bit clunky. They music editors didn’t feel the need to pull out the most well known Santigold, Angel Haze, or Kreayshawn tracks, to the detriment of a scene, so it doesn’t really make sense why they felt the need to do it here.

Overall the soundtrack supported the film well, all things considered. The less stellar moments could probably be forgiven after repeated viewing since the stronger tracks are much more prominent. I am of the opinion they could have benefited from a look at our hard femme list to round out their track selections, or even considered well known artists like Missy Elliot or M.I.A. (While they aren’t new to the music scene, we don’t see them much in action comedies.) The soundtrack did leave me having to ask one lingering question, which is how I felt about the work of artists of color being used to support a story where the most visible characters are White. (The two supporting leads are both men of color, but we don’t see them charging into battle, or really developing as characters, and they serve mostly to move the plot forward and add some faint semblance of a love story.) While I’ll agree that both funk and hip-hop are very much mainstream genres, I was keenly aware of the fact that I was hearing many Black female voices without seeing many Black female faces on the screen, and while I applaud the deliberate choice to use female MCs on the soundtrack, I still couldn’t ignore this fact.

1 Response to Hot Hot Heat: Music, Gender and Race in The Heat