Continuing in my review of Warren Ellis’s synthetic heroes series (that’s what I’m calling it), this week I want to talk about No Hero. Written by Ellis, with art by Juan Jose Ryp, No Hero looks at how far the individual would go to obtain special powers for himself. 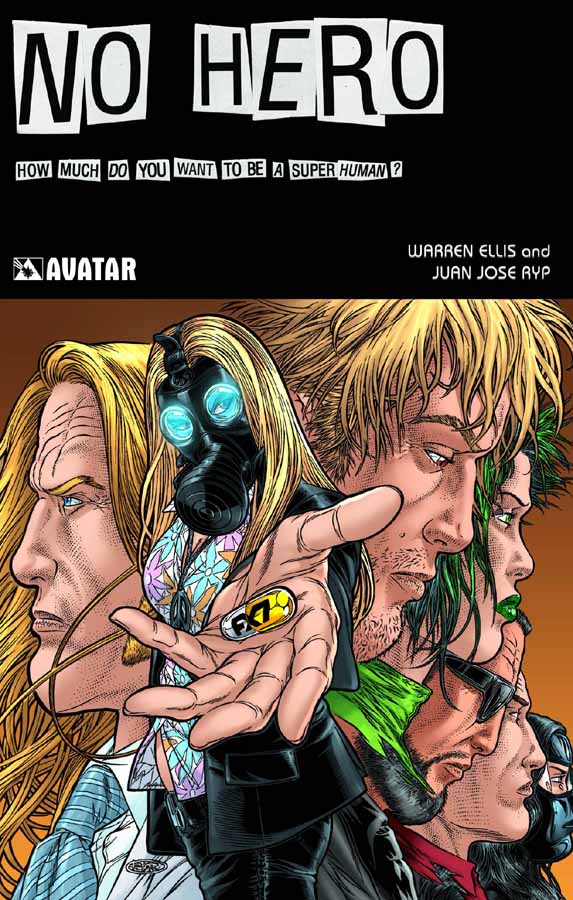 The book opens with a look at a group of vigilantes in 1960s San Francisco calling themselves The Levellers. They come about in response to the increasingly violent police reaction to the American counter-culture movement and violent street crime. The Levellers evolve into a team, called The Front Line, and work to maintain calculated balance and prevent the world from becoming one giant police state.

When one of their own dies, the team finds a replacement in a young man named Josh. He draws their attention when he makes himself noticed through his street vigilantism, expert fighting skills, and parkour abilities. Josh is brought into the group and given the pill which will give him his abilities, but no one expects what he will truly bring to the team.

What got me about No Hero was the ballsiness of it. Ellis really takes your emotions for a ride with this book, and the result is a fantastic mess of “WHAT THE HELL JUST HAPPENED??!?!?” You know, it’s that reaction that makes you say, “No, that can’t be right!” causing you to go go back and re-read the book over and over again.

The main themes of the book are hubris and self-examination. The pill given to all of these would-be heroes turns them into what they are inside. Whether they’re good, or horrible, it will show all over. This can mean many things for those who have been taking the drug since the 60s, as something more sinister can be hidden underneath a shiny veneer.

Once again, Ryp’s art blows me away. The detail and gore make for a truly intense read. The dream sequences in particular are gut-wrenching in their horror, and his portrayal of San Francisco is fantastically accurate! While this book is much less lady-centric, No Hero does examine the extremes of social justice in a compelling and interesting way. It’s a great installment in Ellis’ series, and next week we’ll wrap up the discussion when we look at Supergod.