Photo by Jill Greenberg [via laughingsquid]

It seems like Netflix is really trying to give Showtime and HBO a run for their money with all the high quality original programming they’ve been putting out lately. One such show is Orange is the New Black, the latest “dramedy” from Jenji Kohan, creator of Weeds. As with Netflix’s first step into original content, House of Cards, and the fourth season of Arrested Development, the entire first season is available on Netflix Instant Watch, allowing viewers to choose whether to space their viewings out or “binge-watch” the entire season at once.

Based on the book and true life experiences of Piper Kerman, Orange is the New Black follows the story of Piper Chapman, a “nice blonde lady” who had some wild and Sapphic drug-running times in her youth which caught up to her years later and landed her in prison, for a little over a year. Inside, Chapman learns much about prison life, herself, and her relationships with others, but the real draw of the show is the extraordinary and diverse cast of supporting characters. There are White women, Black women, Latina women, Asian women*, old women, young women, straight women, lesbian women, as well as a transgender woman, who is devastatingly played by transgender actress Laverne Cox. This casting alone would almost be enough for me, but the show took it a step further by daring to be well-paced, expertly written, and beautifully filmed. It is, quite simply, an exemplary show. 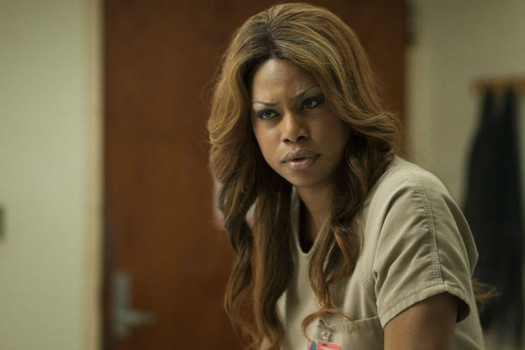 The lovely and talented Laverne Cox. [via The Washington Post]

Similar to Weeds, OitNB presents its audience with a flawed and sometimes frustrating main character. Piper Chapman is much like Nancy Botwin: a somewhat sheltered and WASPy White woman enamored with the idea of danger and intrigue, but gets in over her head and must quickly learn the ropes of her new life, or be swept under with the tide. Piper’s transformation throughout the season from an unassuming, well-to-do lady to a woman struggling to cope with her circumstances and her demons, is satisfying because it is so earnest. She and her problems are never prioritized over the women around her, and she is constantly being called out for her presumptions and mistakes. Chapman is read to filth by multiple people throughout the season, and they usually have a point. Whether it’s the maternal Red telling her she needs to toughen up, or ex-girlfriend Alex reminding her that it was her choices that landed her in prison and no one else’s, Chapman is clearly fallible, and that makes her growing connections with fellow inmates all the more poignant. 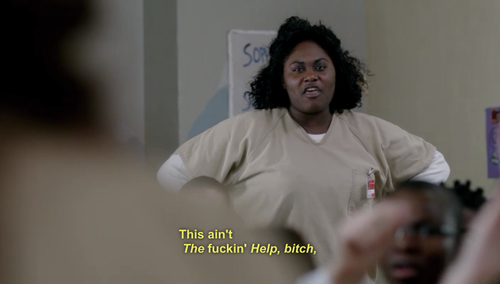 Tasha “Taystee” Jefferson never has a problem putting someone in their place.

Of course the show is not without its missteps, though I am not sure whether to attribute them to insensitivity on the writer’s part, or an attempt to reflect the characters and settings as honestly as possible. For example, Piper is almost certainly bisexual, having had relationships and sexual attraction with both men and women, yet most of the people around her seem determined to place her in either the “straight” or “lesbian” box. The only person in the show who seems to accept the possibility that Piper’s sexuality might be more fluid than simply being lesbian or “not lesbian” is her brother Cal (who often serves as the voice of reason amongst Piper’s somewhat clueless friends and family). The fact that Cal speaks out against Piper’s fiance Larry’s insistence that Piper must be “either/or” indicates that at least, his is not the only opinion on the matter. There is room for discussion within the narrative and that is a step in the right direction. Similarly, the word r***rd is thrown around by a number of inmates and correctional officers, although it seems to serve as an indication of their crude humor or generally crass personality. Still, as usual, intention does not lessen the wince-inducing feeling that using the word engenders.

On the bright side, throughout the season we get to see the honest and moving stories of women of color as well as the more vanilla Piper. These include previously-mentioned Sophia, a transgender former firefighter with a wife and son at home; Janae, a track star who got in over her head; Claudette, a survivor of human trafficking; and Daya, who followed in her mother’s footsteps and ended up imprisoned with her. Kohan has said she has plenty of ideas for more characters and has more stories to tell, and that she could keep OitNB going for many seasons. I hope she’s right, for I am heartily looking forward to seeing this story develop and its cast grow.

*In the interest of full disclosure, as of now there is only one prominent Asian woman on the show, Chang, but I couldn’t be sure if there were more minor Asian characters I’d missed, or if Chang’s story would be expanded later, which might provide an opportunity for more Asian women to be featured.