We’re No. 1! Waves of Mutilation 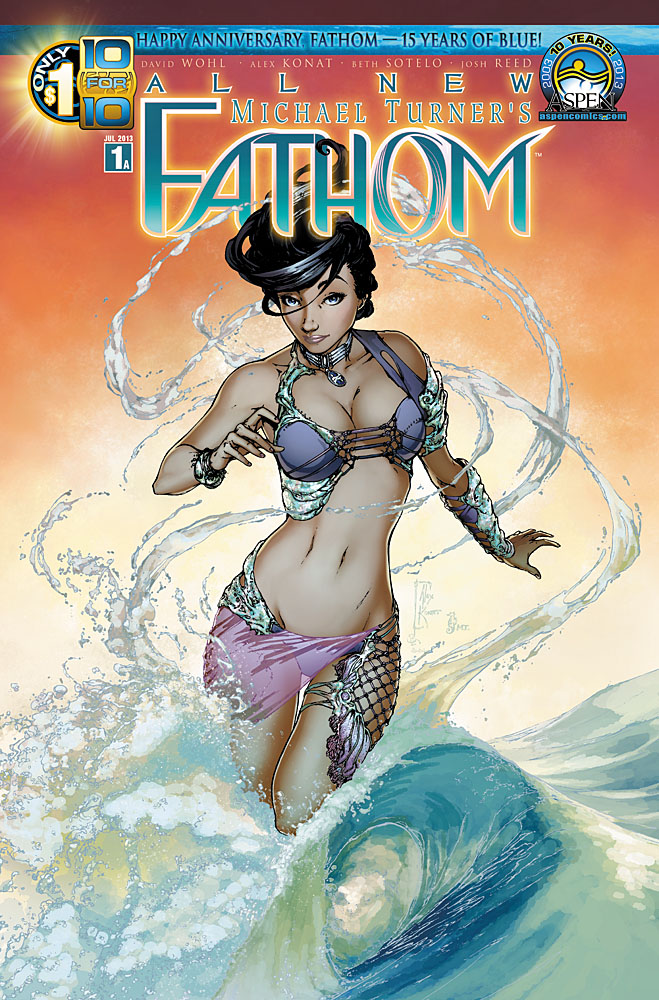 First up is a surprisingly positive story from Aspen Comics, with the return of Aspen founder and creator Michael Turner’s Fathom #1. The company is celebrating it’s tenth anniversary, and launching this fifth volume of its founder’s first creator-owned series is a huge piece of that celebration. Aspen often skirts a fine line between exploitation and celebration of women, but manages to land on the right side of it with Fathom. The main character is Aspen Matthews, a young woman who is a hybrid member of two undersea humanoid species known as the Blue and the Black. Raised as an orphan with no knowledge of her unique origin, she’s been drawn to the sea her entire life, becoming a marine biologist before learning her true nature. Here, Aspen’s adventures have led to a certain bit of celebrity, which she uses to good effect after managing to contain a massive oil rig spill single handed. She boldly proclaims that, despite being viewed by the media as a spokesperson for the Blue, she considers “everyone ‘my people’.” She is also quick to put public pressure on the corporate entities whose negligence led to the spill. While depicted rather scantily on the cover of the book, in no way is she exploited within its pages. This is a mistake a lot of other comics companies make (*cough* Zenescope *cough*), but writers David Wohl and Frank Mastromauro and artist Alex Konat present her within the comic as a powerful woman with a love for the oceans; a woman with her own ideas about who she is in a world that is struggling to understand a new species of humanity. I must admit I was so turned off by the cover that I almost passed on reading the book altogether, and while I do worry about books that seem to market on the image of bikini clad women, I’m pleased I didn’t judge it by it’s cover alone. Neither should you. 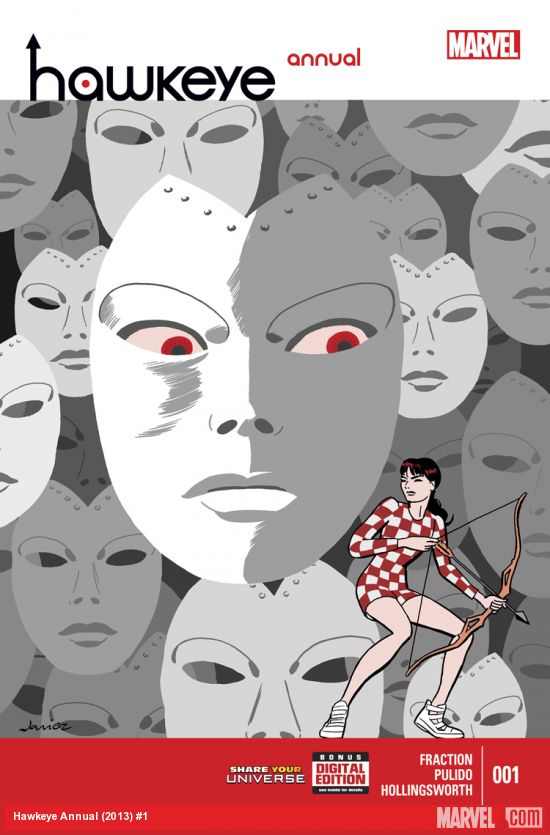 Cover art certainly hasn’t been a problem for Marvel’s Hawkeye series, with artist David Aja having recently won an Eisner award for its front pieces. The book has also treated one of its two protagonists with fantastic respect, and does so again in Hawkeye Annual #1.  This cover is by Javier Pulido, and it depicts the female Hawkeye, Kate Bishop, at odds with her adversary Madame Masque. It’s a great book written by Matt Fraction in the down to earth and humorous style of a real life person who also happens to be a super hero, which has become the series’ calling card. In the series’ first annual, the younger Hawkeye has had enough of her mentor, Clint Barton. She’s packing up her things and moving to L.A., with the star struck naiveté one might expect of a twenty-something. She quickly runs into trouble when her cash flow dries up (she’s rejected to overbearing wealth and patronage of her Father) and a recent feud flares up between her and Madame Masque. The attempts of these two women to deceive and ultimately destroy each other are surprisingly lighthearted, but it’s never treated as a “cat-fight”, or painted as trivial squabbling of little girls, as often happens in mainstream super hero comics. It’s all very matter of fact, as Madame Masque attempts to exact revenge for previous slights. Kate is written by Fraction, and drawn once again by Pulido (who took over duties from Aja in the previous Kate-centered story in the main book), as capable but still very young. There is emphasis on her lack of experience and her need to grow up and prove herself. Her impassioned speech on her own behalf, repeated twice at the end of the book, lands her a job and new digs on the beach, as well as a new outlook on life as an independent young woman. It also signifies a character who is growing not only into a hero, but just plain growing up, and it makes her the most interesting Hawkeye in the series. 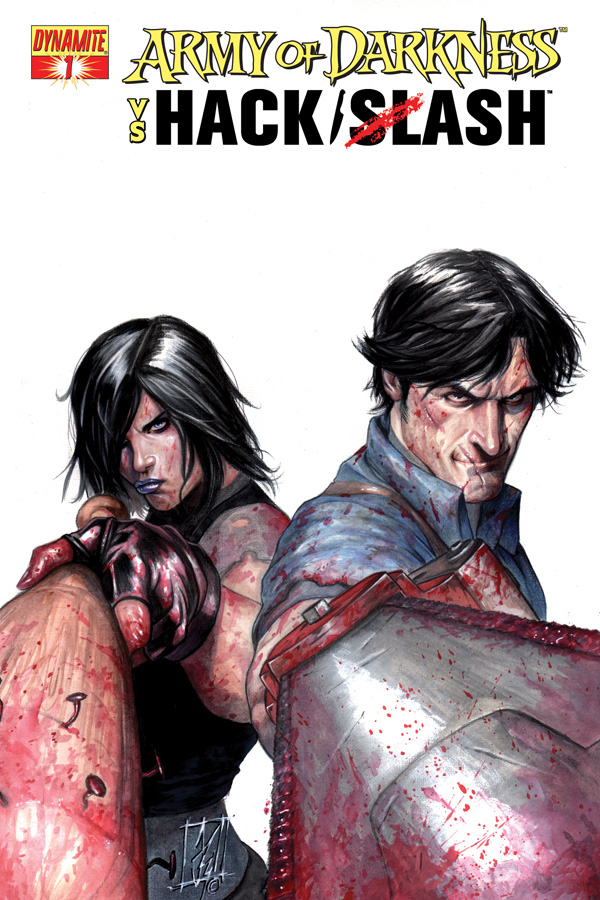 Our third great book this week is another surprise, in its quality if not its message. It’s the horror comic mash-up Army of Darkness vs. Hack/Slash #1. Often, these obvious dream team-up comics end up being trite and silly, as writers and artists attempt to force characters together. Here, however, Tim Seeley (who writes the Army of Darkness ongoing series) and artist Daniel Leister merge these two universes rather smoothly, largely by concentrating on Cassie Hack, the hero of Hack/Slash. The book in fact, feels more like a Hack/Slash miniseries that happens to star fan-favorite Ash Williams, and Cassie Hack is the star here. Rocked by events from her regular series, she is now trying to live a new life; she’s settled down in a committed relationship with long time love interest Margaret Crump, and she also is a mother. In fact, it’s this family unit that serves as the core of the narrative, as pages from the Book of the Dead demonically possess Cassie and Margaret’s babysitter, disrupting the first date night they’ve enjoyed in … well, maybe ever. Cassie is pure third wave feminism with a bat, and her drive to hunt “Slashers” and other demonic forces has never held the depth of belief as it does now, as she defends her home and family. Ash, who resembles actor Bruce Campbell but doesn’t feel like a caricature when drawn by Leister, is his usually hammy quip-laden self, and fans will surely find what they are looking for with him, but it’s Cassie who steals this action-packed gore-fest, and the book is better for it. 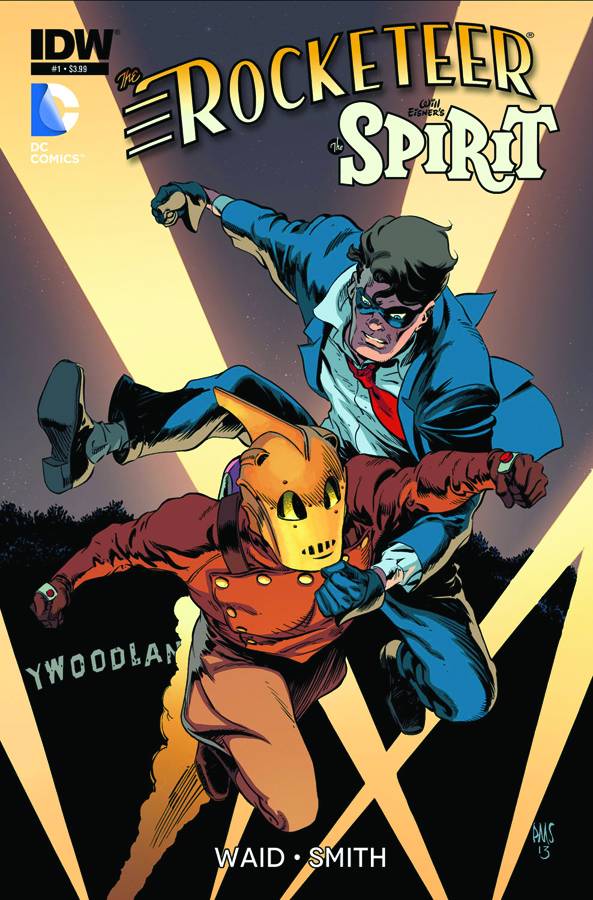 Sadly, our last book this week has few surprises, as it treats its female characters with very little respect at all. This has become all too common in books featuring pulp 40’s era hero The Rocketeer, and it continues in IDW’s The Rocketeer and The Spirit: Pulp Friction #1. The heroes of the book view the women in their lives as simply damsels to be saved and protected, or as annoyances when they happen to be safe and expressing (god forbid) their opinion. Here, writer Mark Waid presents The Rocketeer’s long time girlfriend Betty as a fragile model with little going for her beyond her looks. She is so traumatized after finding a dead body while on a modeling shoot (during which her female photographer insultingly tells her that she’s “incomplete! You need to find a MAN! … Keep sticking that lip out until you find a MAN!”), that she’s bed ridden in tears for several days. When The Spirit arrives from Central City to investigate the deceased (a Central City Alderman, as it happens) he has Ellen Dolan in tow, and she receives only slightly better treatment.  Ellen is portrayed alternately as shrill and shallow, or opinionated and with little tolerance for the childish tactics of the “heroes” around her. She is, at least, not depicted a sexual object in the way that Betty seems to be, and her character improves as the book carries on, albeit only slightly. The Spirit seems to regard her as an annoyance at best, and Cliff “The Rocketeer” Secord does as well. This is nothing compared to his treatment of his own girlfriend Betty, as he refers to her as a “real hothouse flower,” mocking her lack of strength. Sadly, she proves him right, immediately (and literally) swooning into the arms of The Spirit the moment they meet. This is a book that could have used a little first and second wave feminism, or really just any consideration of women with respect at all, and its treatment of the ladies was so horrific it distracted from the narrative completely (which wasn’t all that fantastic to begin with.) In total, it was a real stinker, and should be passed over in weeks to come.

This entry was posted in Uncategorized. Bookmark the permalink.