Race, Vigilantism, & Zombies In Wes Craven’s The People Under The Stairs

Posted on September 3, 2015 by Guest Contributor

This post first appeared on Graveyard Shift Sisters and is cross-posted here with permission. The site’s motto is “Purging The Black Female Horror Fan From The Margins” and you can also follow along on Twitter @GraveyardSister.

Horror’s true effectiveness is executed when it’s busy making us uncomfortable in our comforts. The everyday and mundane that lures us into a false sense of security can become the very sight of anxiety. Wes Craven’s mission as a storyteller early on was to do exactly this. And I appreciate that. He does so with a certain complexity and I think his sleepers don’t get the attention they deserve. And I admit that some of them have taken me awhile to get to and that, like any filmmaker, his body of work suffers in some areas. 1991’s The People Under The Stairs is not a film I grew up watching strangely. How this one slipped into the cracks of my mum’s VHS collection is some kind of freak accident, so I went into a viewing with no nostalgic childhood memories.

This is a 90s home invasion genre film that could easily be described as “Home Alone in hell”. The story rollercoasters around a budding young man named Poindexter Williams, better known as Fool (Brandon Quintin Adams) who throughout the film watches his deteriorating, drug infested apartment complex, and older sister Ruby (Kelly Jo Minter) working to support not only her own children but the declining health of their mother. Ving Rhames’ Leroy makes attempts at being the solution to life’s circumstances by showing Fool the “substantial” trade of the pillager arts as they, along with fellow robber Spenser, concoct a plan to rob the domicile of their landlord who’s evicting them for being behind on the rent, but really just wants to tear down and re-build something that’ll bring wealthy renters in and widen his pocket liners. 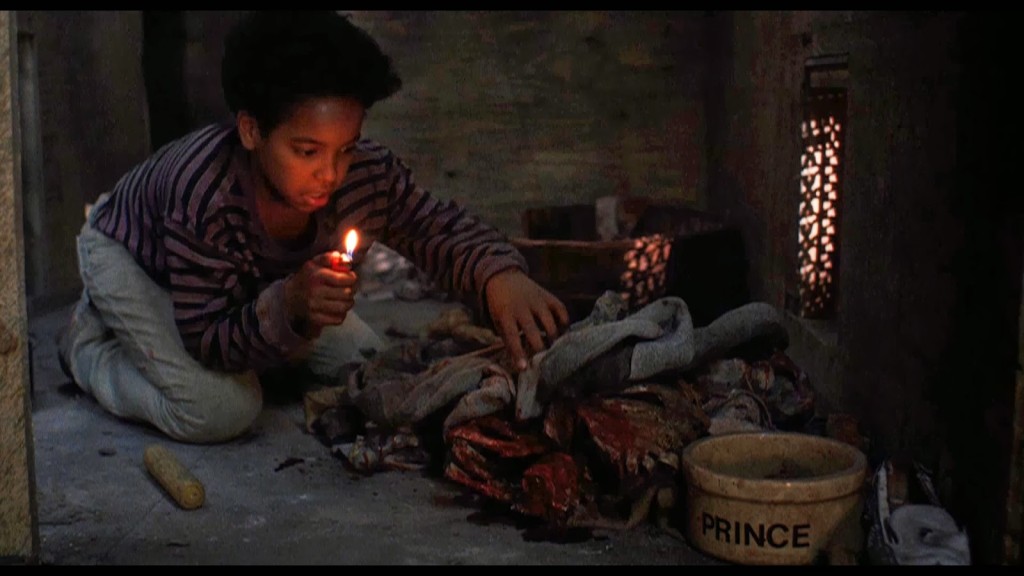 Unfortunately, Leroy’s heist target is a house that belongs to rumors and myths that concern the descendants of ex-Funeral Home runners turned Real Estate parasites only known as Man and Woman, who’ve kidnapped and tortured a number of children and adults throughout the years to contrive their “perfect family.” When faced with defiance, Man and Woman kill and mutilate, making their home one big trap of mazes and an ideal set-up for a real life first person shooter game. When the heist falls apart, Fool is the only one left and trapped for Man and Woman’s thrill of the hunt, but with the help of young Alice as Man and Woman’s victim/”daughter”, maze-master and fellow victim Roach, and somewhat random “zombies”/not really zombies, Fool fights to free their captives as well as help his family.

The People Under The Stairs vibes off of pretty distinct binaries. The setting of urban vs. suburban has its roots in sanity vs. madness. The urban, ghettoized area of southern California condemned to the poor, working class people of color, in particular Black families trying to make 50 cents from a penny, presents a persistence in survival, love, and diligence. Ruby wants Fool to hold onto his dream of becoming a doctor. Fool is determined to help his mother get the medical care she needs. Despite their circumstances and the off-shoot antagonist of Leroy, as he lures Fool into a justified burgarly attempt, this downtrodden family stays intact. It actively negates popular myth of the black, inner-city families torn by poverty, crime, and the lessening structure of community. And in 1991, this was especially of importance to see in a mainstream Hollywood film out of a hostile decade that painted the Black family structure as inherently morally reprehensible. We had crack mothers/crack babies or the Huxtables and even in 2014, we’re still struggling to conceptualize everything in between on screen for a mass audience. 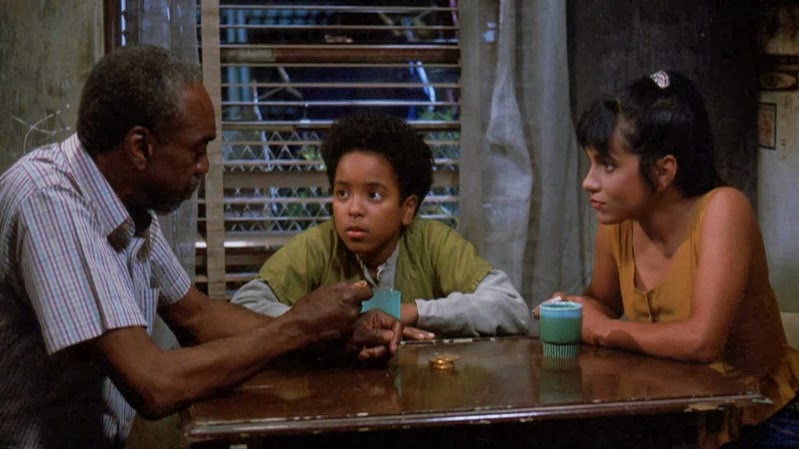 The suburban frame, mostly confined to the house of Man, Woman, and Alice amongst others, doesn’t make much room for us to imagine them to be the picture perfect white nuclear family. From the first scene by a flaming fireplace and Man’s gluttonous hankering for flesh and gentrification, Craven makes haste of questioning the desire for the big house in the nice neighborhood with consistent wealth, turning it into pathos and henceforth, a recipe for destruction. As Man and Woman’s legacy stays intact with playing Mr. and Mrs. Pac-Man for a more idealized yuppie landscape at the expense of those poor Blacks, I still found myself wondering if it’s too simplistic to split Leroy, Spenser, and Fool’s burglary attempt into a question of right or wrong, even though the film follows a simplistic trajectory of a kind of sociocultural morality tale. 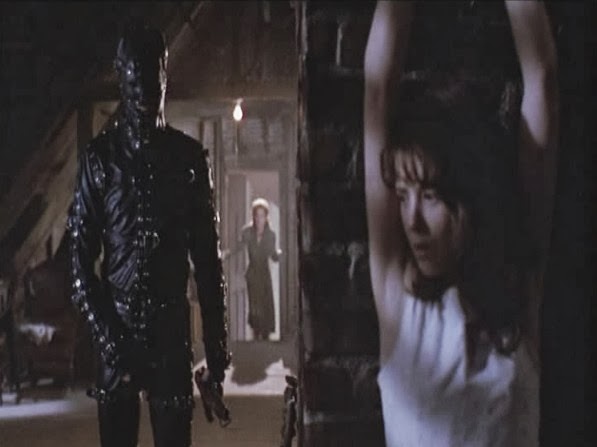 Desperation and the misguided conceptions of “being a man” makes for endless excuses for men who feel it necessary to provide for their families by any means necessary. Fool’s youth saves him as much as his witnessing the deaths of his partners in crime. Their deaths are his warning. He understands that he may not be able to completely destroy Man and Woman and the nature of their derangement but finds his victory is not just his, but for the people in his community, including Man and Woman’s victims which unifies people regardless of race. This is especially shown when Ruby and members of their community confront Woman on her doorstep during the film’s climax. They come not just for Fool, but for the lives they have systematically destroyed.

Maybe the not-zombies figure into the story as another group of oppressed individuals. Maybe Wes wanted to show not-zombies not as mindless drones but thinkers with higher motives. The anti-enemy to establishment, not complicit in its tyranny. I’m not entirely sure but they lead Fool to seeing why ‘there’s no money in the ghetto.’ A vault filled with mountains of money and gold and just plain greed. In the end, the house succumbing to dynamite and the rain of money is the redistribution not of power but empowerment. The set up was knowing what the money would be used for – medical expenses, a home – and not for hoarding and the deranged control of others.

Fool’s community showed up for justice, their reward, cash in the hopes of rebuilding their crumbling landscape. And I don’t know if you would call those walking monstrous figures zombies but let’s go with that. The People Under The Stairs is certainly a time capsule of 90s race and class commentary.

This entry was posted in cross posts, film and tagged Graveyard Shift Sisters, horror movie, The People Under the Stairs, Wes Craven. Bookmark the permalink.