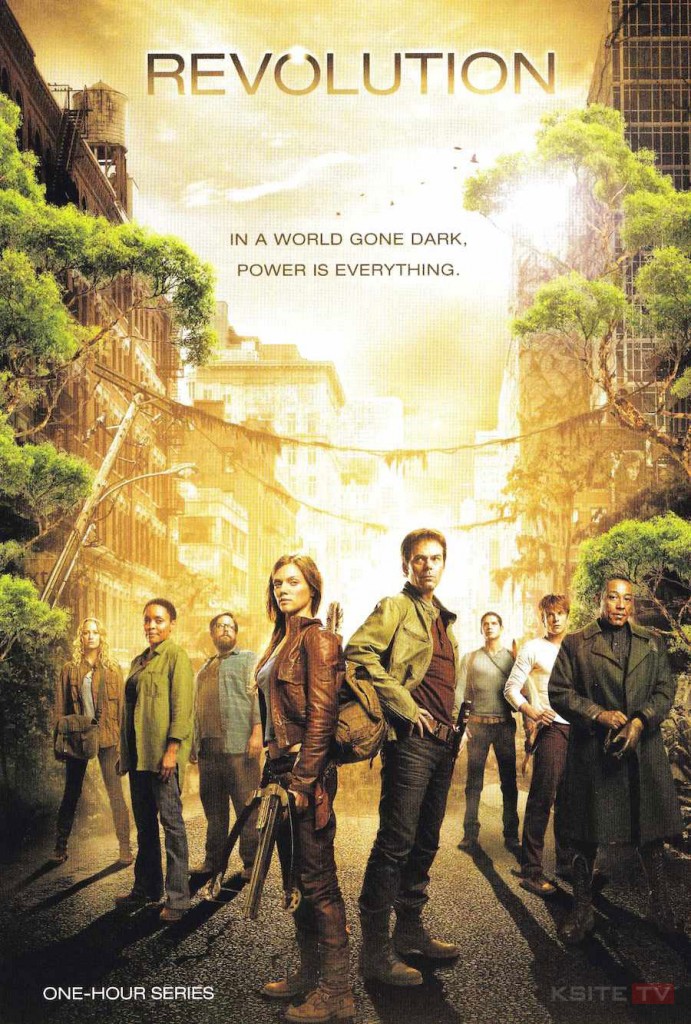 On Monday NBC put up on Hulu the pilot of it’s newest Bad Robot sci-fi series, Revolution (network premier Sept. 17). A few of us have been looking forward to it: I mean, who can resist a good Singularity mystery? Unfortunately, there were more than a few things about this pilot that didn’t spark the same passion in me as other shows are doing right now. Warning: spoilers within.

For those of you who haven’t seen the trailers, Revolution is the story of what happens after all of the power goes out, permanently. They fail to mention whether this affects the whole the world, or just the Americas, but let’s just say it’s the world, for the sake of logic. Only a select few people know why, one of them is Ben Matheson (Tim Guinee), who tries to warn his brother Miles (Billy Burke), but is cut off as the power dies.

We are introduced to some of the main players of the series 15 years after the event. Ben is now living happily in a town settlement with his children Charlie (Tracy Spiridakos) and Danny (Graham Rogers). (The fact that these two young actors look like photocopies of Katniss and Peeta from The Hunger Games movie is probably not a coincidence.) Ben, now a widower, has a girlfriend, Maggie (Anna Lise Phillips) and a chubby, nerdy friend named Aaron (Zak Orth), seemingly in the show for non-threatening comedic relief.

Revolution suffers grievously from a case of White People Syndrome. The background extras are quite diverse and representative of the population of Chicago, but the main cast is almost entirely White. Sure, the leader of the Militia, Captain Neville (Giancarlo Esposito), who comes into town to take Ben to the evil and mysterious (and White) leader Monroe is a Black man. But do we really need to have yet another instance of the Black Dude Is the Bad Guy trope? When Neville’s group kills Ben and takes away Peeta Danny, we have to save the pretty blonde boy from the scary Black man. Come on, NBC, your racism is showing.

We also meet Grace (Maria Howell) and, fortunately, her character is a lot more positive. Grace helps hide Danny, and her character is also given some intrigue when we later find out that she is part of the select group of people who know What Happened. I have high hopes for her character, but I get the feeling that I’m going to do a lot of shouting at the TV screen, “LET GRACE BE GREAT!”

Between the overwhelming Civil War imagery and the traditional Hollywood disregard for more racial diversity, I’m not optimistic that the series will deliver, Geekquality-wise. Don’t ever get me started on the fact that we’re assuming all people with disabilities died off after the blackout, and so far we haven’t met anyone outside of the gender/sexual binary (and doubt we will). Probably one of the few highlights was a pretty bitchin’ swordfighting scene, but that’s about it. Because I’m a glutton for punishment when it comes to J.J. Abrams-produced shows, I will probably continue to watch the series, but I don’t really have high hopes for the show in the long run. I’ve got my side-eye on you, Revolution.