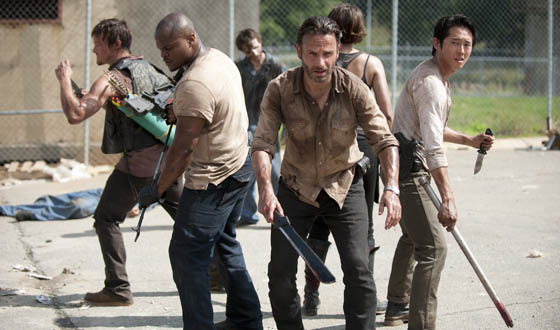 Lois and Moxie had a water cooler chat about Sunday night’s The Walking Dead, because they’re just SO MUCH to say. Obviously: Spoilers and salty language lie ahead. Join in with your thoughts on the mid-season finale in the comments.

Moxie: So, wonder of wonders, the show actually opened with not one but two PoC, and NEITHER of them died in the first 15 minutes.
Lois: UNTIL. Until until until…
Moxie: Until Black Prisoner died, but he was not new.
Lois: The gunshow where Oscar was just dropped, without any words or ceremony. BLAM! Goodbye! I’m not holding out much hope for our ladyfriend, because there can ONLY BE ONE at a time, and if that’s Tyrese, he’s going to stay for a while.
Moxie: But Yosemite Sam Moustache gets to stick around and scam on Carol.
Lois: Ugh and Luna Lovegood. 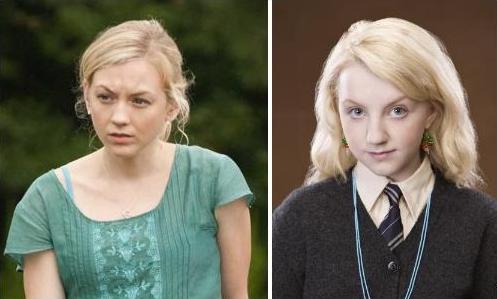 “Watch out for Nargles, y’all!”

Moxie: Oh no, Black Lady With Great Hair HAS to bite it.
Lois: My skin started crawling.
Moxie: She is as good as dead.

Lois: Of course. Cause she’s going to call people out on their shit, and folks are probably shitting their pants at the thought of two Black women possibly running things and challenging Rick.
Moxie: We know Tyreese, and he’s an actor we’ve seen before. She isn’t. And Black folks are like the highlander of TWD, there can only be one. And Michonne is still with us, thank based god. Rick couldn’t handle it. Great Hair has the most sense we’ve seen, maybe, in the last 3 seasons of this show.
Lois: I’m hoping that the only reason Michonne hasn’t hightailed it out of there is that so she can slap the shit out of Rick for his “welcome”.
Moxie: Shocked she didn’t just leave everyone once they got to Toon Town this past episode. Because they were some ungrateful sourpusses, I tell you what.
Lois: Tyrese did not get off to a good start. If some punk ass ten-year old wearing a cowboy hat locked me in a jail cell, I’d throttle the fucker. Instead, he’s all, “Oh this is better than what we just had!” This could have been my imagination.
Moxie: Tyrese is on some new shit and I don’t know what to expect from him. Right now the bar is set pretty low and I am not interested in sacrificing Great Hair for his dumbass right now.
Lois: But did you take a good look at Michonne’s necklace? It looked like a tiny “A” charm. I’m wondering if Michonne is just really set on murdering the Gov (which she would have if not for a certain basic bitch), or if she wants to get Andrea out of there.
Moxie: I don’t know, I hope it’s the former. Because I’m sick of Andrea too. I don’t know how someone can be so dickmatized. Homegirl sees this man, surrounded by severed zombie heads, clutching his zombie daughter, and she still rushes to his side.
Lois: Ugh…
Moxie: And this is after a host of other foolishness perpetrated by him. How do you do this, Andrea?
Lois: I was really holding out for Andrea this season but she’s officially moved onto my shit list for all you care.
Moxie: Why did you raw dog it with Shane in that Ford Focus, ANDREA?! So many questions.
Lois: She’s no ride or die bitch. SHE’LL DUMP YOU FOR HER BOYFRIEND. Can we also talk about Andrea’s privilege?
Moxie:YES, because that’s all Andrea is, at the moment.
Lois: It’s been such an odd thing to see, after her and Michonne stepped into Woodbury. Of COURSE Andrea likes it. It’s a cozy life, and she’s pretty, and her real job is to sleep with the Gov and pretend to be a good soldier. She gets to pick and choose what she wants to do.
Moxie: Basically, and that’s what it was for her from day one, and it was never that for Michonne.
Lois: Meanwhile Michonne was probably picking up on some bad juju the moment she stepped foot there, what with Merle leering at her and the Gov’s KKK Speech a la Old Dominion. 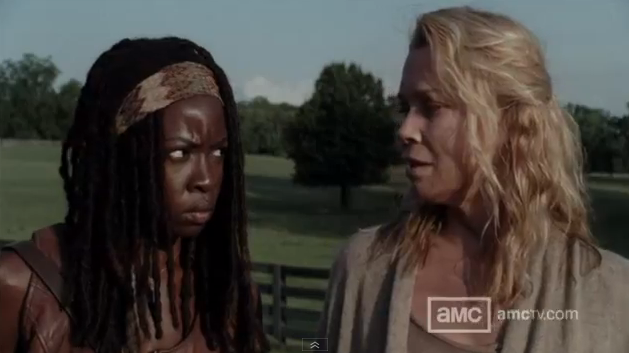 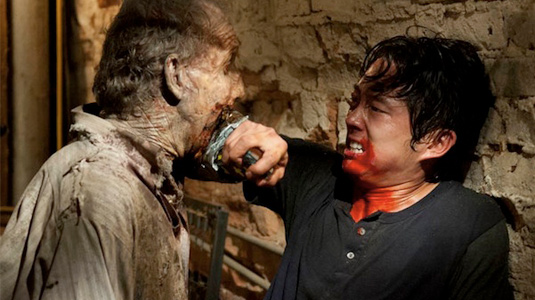 Lois: Yeah. I mean who knows what he was really in there for? But aside from Michonne/Daryl and Rick getting reamed, I also hope that Glenn takes more spotlight and possibly embarks on a bromance with Tyrese.
Moxie: That would be amazing IF Tyrese can get it together
Lois: I’m sure he will.
Moxie: I think Glenn and Great Hair could be bros because they’re both smart but 1) she’s gonna die 2) I don’t think people are ready for two young attractive people JUST being friends.
Lois: This is the school of hard knocks. I would SO ship it if she’d live, OMG. The relationship potentials on this show are endless.
Moxie: God it would be so beautiful. There is so much that could be!
Lois: Sister/Brother-Wives this shit, please.
Moxie: I mean the world has ended, the rules have changed.
Lois: Free love. It’ll be good for the collective human gene pool. Somehow.
Moxie: BUT NO BABIES…yet.
Lois: Oh goodness hopefully none. For a long, long time.
Moxie: They have to ride some of this Armageddon shit out before they start procreating.
Lois: But Glenn is smart. I bet he knows the rhythm method (is that what it’s called?)
Moxie: I think they call it that, I never went to Catholic school.
Lois: I’m not so sure either.
Moxie: I’m almost positive. I don’t know, they can do all kinds of freaky shit that doesn’t make a baby.
Lois: But if all else fails, I want all the PoC on this show to just flip the bird, and walk off into the sunset.
Moxie: YES PLEASE, THAT WOULD BE IDEAL
Lois: I like this spin-off a lot better already!

This entry was posted in chats, recaps, zombies and tagged The Walking Dead. Bookmark the permalink.