The holidays are a whirlwind of family, friends, and food, but usually a slow period in the world of comics. The past two weeks were no exception, with only a few notable #1’s hitting the shelves. 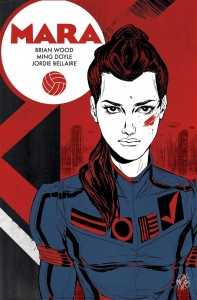 In the final week of 2012, Image Comics stepped up again with a new series written by Brian Wood, Mara #1.  The title character is Mara Prince, the super athlete of her time, living in a future world obsessed with physical prowess, sports, and war. After her world was nearly consumed by conflict, corporate-backed sporting leagues of every variety grew into an unprecedented global obsession, fueling a society driven by physical greatness and celebrity. Mara is the greatest of all the athlete celebs, a combination of girl-next-door beauty and warrior-like physical acumen, and she’s completely famous and utterly wealthy to boot. In fact, we’re told this so many times during the course of the first half of the comic that it’s tough to be on her side. If she’s the hero here, we assume she’ll face some sort of adversity, but she’s put on such a pedestal, it’s hard not to want to see her fall from it. The entire buildup has an air of unreality to it, and when Mara suddenly develops super human abilities while on television in the midst of a game, it’s hard to know if this is the beginning of her struggles, or a well deserved comeuppance. Still, as a woman and a person of color, Mara is a character that’s rarely seen in comics. Instead of the system of the future exploiting her for her good looks, she seems to be using the system to her own advantage. She’s also possibly in a lesbian relationship with one of her teammates, so there’s a lot going on here that’s interesting. Still, there’s a subplot of a dangerous fan in the background of this story, and the plot structure is a little all over the place, in particular Mara’s development of supernatural gifts, seemingly at random. This story might bear following for its positive representations of a minority character, but it needs to get it’s narrative act together. 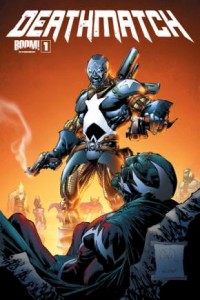 Boom Studios also brought us one last new series of 2012 with Deathmatch #1, written by Paul Jenkins, with art by Carlos Magno. Deathmatch is set in yet another fully formed superhero universe that is populated largely with analogs of heroes and villains we’ve seen before. Here, an unknown force of evil has kidnapped the 32 top super powered people in the universe, setting them against each other one by one in fights to the death.  his series has been billed as an unique exploration of the super hero genre, but it falls sadly short of other previous attempts on the subject matter. Where Watchmen explored the nature of power itself as personified by superheroes, or Superbia looks at depths of true humanity and family in such a world, Deathmatch is actually just an almost decadent excuse to pit one muscle-bound character against another, with violent death as the predictable result.  This says little about the genre itself at all, other than to remind us that abject violence is foolish. Interestingly, that turns out to be a valid point. Deathmatch isn’t dissecting the genre so much as holding up a very glaring spotlight, as if to say. “See! We told you all this carnage, violence, and death weren’t a good idea.” It’s difficult to tell, based on recent attitudes in this country towards violence, if I’m reading into the series simply what I might want to find. With such a simple point and a story that’s, frankly, extremely blunt, it’s hard to wonder if that really matters. 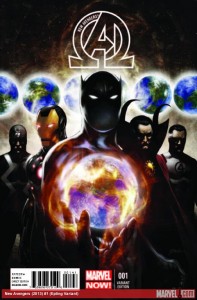 In the New Year, the comics companies are slow to get off the mark, and what they are bringing us is a lot of the same things we’ve seen before, unfortunately. Marvel, in fact, is the only publisher with significant #1’s on the shelves this week. They begin with yet another indecipherable Avengers title labeled as a #1 that’s really anything but, in New Avengers #1. In fact, the very first words of the book are, “Previously in New Avengers.” It’s a convoluted tale that harkens back to the Illuminati story lines from the regular Marvel Universe in which several top line heroes, including Iron Man, Captain America and Dr. Strange, apparently agreed in secret to rule the world together. At the time, they were opposed by the Black Panther, who is now the focus of most of this story. There is very little team superhero-ing going on here at all, and the book reads more like a set up for Black Panther vs. the Avengers (which would be pretty interesting, frankly). It’s nice to see the first African super hero getting some solid coverage, as Black Panther has long been one of Marvel’s most compelling characters. There’s an incoherent story here, however, with unexplained sci-fi elements and a lot of preachy sounding background dialogue that infects way too many comics these days. Ultimately, it’s disappointing to once again see the Black Panther not utilized as well as he could be, and it only makes me long for the day Marvel finally gets this character right. 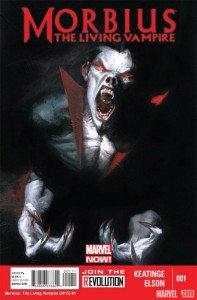 Marvel has resurrected another of it’s side-line anti-heroes in Morbius: The Living Vampire #1. Morbius is a man turned into a vampire by science instead of (the usual) occult forces, and he has been a sort of foil, if not outright villain, to Spiderman since the early ‘70s. With the onslaught of vampires in modern pop culture, it seems Marvel couldn’t resist getting in on the action, but they’ve taken an unusual track here. At its heart, Morbius is a story about a search for identity, as the afflicted titular character goes about trying to determine who he really is, now that he’s craving blood and avoiding daylight. He’s not a super hero, he’s not attractive (his condition leaves him physically changed into a red eyed, black haired, ghoulish looking goth nightmare) and he’s certainly not involved in any high school love triangles. Neither is he immortal or ancient, which is also a nice twist on the genre. While the story in the first issue doesn’t serve up a lot of interesting twists, it’s a good start when it comes to showing us a character that’s long been on the fringes of the comics universe.

Lastly we have yet another miniseries featuring Marvel’s ultra-violent paramilitary vigilante the Punisher, in Punisher: Nightmare #1. Frank Castle is once again spouting his pain in our faces, recounting the loss of his family and ranting on about his mission to “become the boogeyman” and murder as many people that he has deemed “bad” as possible. This seems to be a character that some folks never get tired of, but again, with shifting attitudes towards gun violence and war in this country, it’s a story that bluntly shows us what we already know and feel. Castle isn’t the only man in his position, it turns out, as he’s teamed with another vet who found he enjoyed the battlefields of the Middle East a little too much. Now, these two ultra violent pro-NRA voters are running amok on the streets together, and if there’s a better definition of all hell breaking loose, it’d be tough to call to mind. Unlike Deathmatch, however, Punisher: Nightmare doesn’t seem to be shining a light on violence, but simply further glorifying it, a failing common to the Punisher books as a whole.

That’s that, a slow start to the New Year for certain. But rest assured, there are lots of new stories in comics coming in the following weeks, so come back to find out what to read and what to skip!