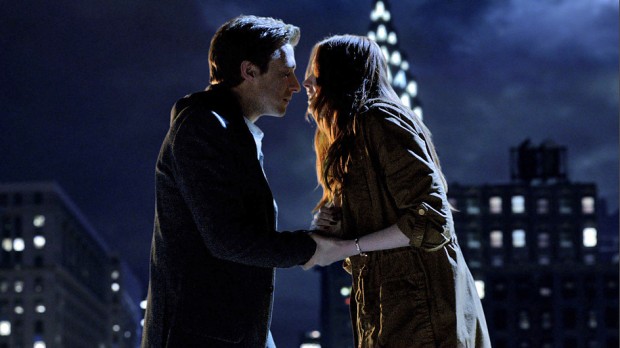 The Angels Take Manhattan is the heartbreaking mid-season finale of Series 7 of Doctor Who. Of course, because he can’t let anyone else have all the fun, it’s a Moffat-penned episode. The Weeping Angels are back, taking over Manhattan, so it does what it says on the box. Our beautiful, wonderful, kind and joyful Ponds are ripped from us; taken away to be replaced by another companion. Commence weeping.

The story follows the plot of a mysterious novel by Melody Malone (YOWZA!), a pseudonym of our favorite demi-Time Lord, River Song. The book helps the Doctor reunite with River, but also is what eventually takes Amy and Rory away from him. By tearing hole after hole in space and time over New York City, everyone finally ends up back together, safe and sound, until Rory is zapped back in time by one last angel.

And then is the saddest but also best part of the episode. Amy is FINALLY given her choice. She finally makes up her own mind, and chooses for herself. She chooses that life with Rory. That life that she was becoming so accustomed to back in Ledworth. Sure, it’s about 60 years in the past, but it’s still with Rory, her best friend. He would’ve done the same for her. I feel like here Amy was finally given control and really showed her strength. She was the Amelia Pond we all fell in love with, and seeing her say goodbye to her friend and her daughter was heart-wrenching. I was a sobbing mess.

I do feel that Amy met quite the same fate that her daughter eventually meets. Moffat has a thing for trapping his women, whether it’s River in the computer, Amy in a paradoxical past, or Renette on the “slow path”. Let’s face it, dude is a poster child for Freudian complexes. But we go forward, on to new things, like Jenna-Louise Coleman as the new companion to be reintroduced during the Christmas special. Until then, I’ll be over here in the corner clutching my S1-5 discs and sobbing.

This entry was posted in Doctor Who, television and tagged Amy and Rory Pond, doctor who, Steven Moffat, The Angels Take Manhattan. Bookmark the permalink.