WhoView: “The Power of Three” 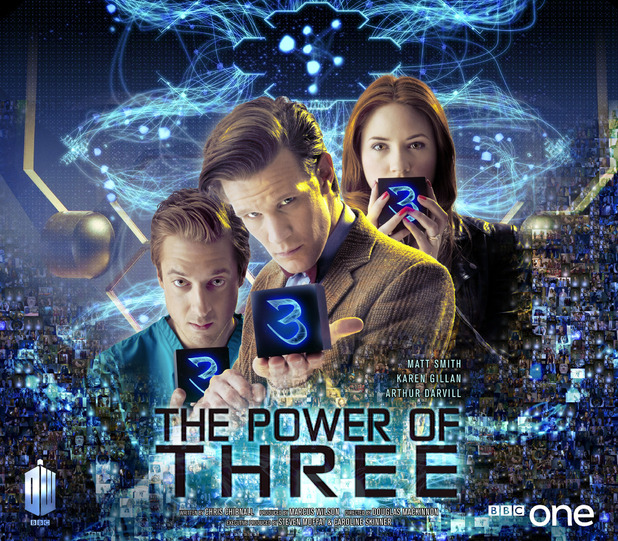 Chris Chibnall, I applaud you! You knocked another one right out of the park for me, and for that I thank you.

Chibnall has a way of writing Amy and Rory that reminds all of us why we fell in love with the Ponds in the first place. They are made human, and they’re made important, the way the Doctor sees them. Although, I also have to curse Chibnall, because it looks like next week my heart is going to be ripped out of my chest and stomped on repeatedly. Well, let’s just focus on the good times and talk about “The Power of Three”. (Spoilers, Sweetie…)

The Power of Three focuses on the forever-changed lives of Amy and Rory. They’re in their 30s now, and the Doctor’s visits are becoming fewer and farther between. They’re finding themselves committing to future engagements and full time careers. They’ve built up a life in Ledworth and are starting to really enjoy it. Then the Slow Invasion begins and it rocks their worlds. The Doctor comes back to stay with the Ponds for a while, to observe the mysterious cubes popping up all over Earth. UNIT pops by, with the Brigadier’s daughter, Kate Stewart (Jemma Redgrave) heading up the investigation. After months of inactivity the cubes scan the globe and and the Shakri (an intergalactic pest control service, from what I understand) begin their attack to purge the universe of the human race. The Doctor and his Ponds save the day, and learn the true value of the power of three.

First things first. I love the nods to classic Who, I truly do, but if you’ve got UNIT, where the hell is Martha Jones? Just give us what we want, Moffat. We want Martha; we want her to meet this new version of her Doctor; we want to see them fight together. (We also want Mickey, because he’s awesome.)

Now that’s out of the way, let’s talk about Brian. Mark Williams does a magnificent job as Rory’s father. He’s kind, caring, diligent, and patient. The apple didn’t fall very far from the tree (they’re both very good at looking after cubes). I am really enjoying his character, and I’m really quite sad that this is most likely the last we’ll see of him. Many of his lines were very obviously used to set up the departure of the Ponds, which Moffat has guaranteed will “rip out your hearts”. I feel like it’s not very often we see a dad like Brian Williams on television. He’s got very motherly qualities to him that really break the mold of the stoic father. He adores his son and daughter-in-law, and I think Chibnall has used him brilliantly as the audience stand-in. He sees the Doctor’s adventures as we see them, and views Amy and Rory as we view them.

On to the Ponds. Again, I love how well they were utilized in this episode, and it was enjoyable getting to look at their lives without the Doctor. I definitely approve of Amy as a travel writer. That makes sense! I also must commend the BBC Makeup Department, as they’ve managed to very subtly and accurately age Arthur Darvill and Karen Gillan. Arthur is actually 30, but Karen is 24, and they managed to make her look more mature and just slightly older.

Anyway, as I think we all could tell, this episode was a setup for next week’s “The Angels Take Manhattan” – is that a Muppets reference? – and the impending gut wrenching departure of the Ponds. I had already heard all the buzz, but when Brian asked the Doctor to make sure that his kids are kept safe, I knew at that moment that at least one of them is going to die. (At which point I will be flying to London to personally pee on everything Steven Moffat loves.)

Moffat hasn’t treated them very well, but dammit, I love Amy and Rory. Not only are they played by incredibly sweet and charismatic actors who are too charming not to love, the Ponds are good people. It’s hard not to fall in love with companions who’ve been around this long! I assure you, next week I will most likely be inconsolable.

What did you think of “The Power of Three”? Let me know in the comments!

Until next week, when all of Tumblr and I explode the Internet with Pond Feels.

This entry was posted in Doctor Who, television and tagged Amy Pond, doctor who, Rory Pond, Steven Moffat, The Power of Three. Bookmark the permalink.

1 Response to WhoView: “The Power of Three”