WhoView: “Dinosaurs on a Spaceship” 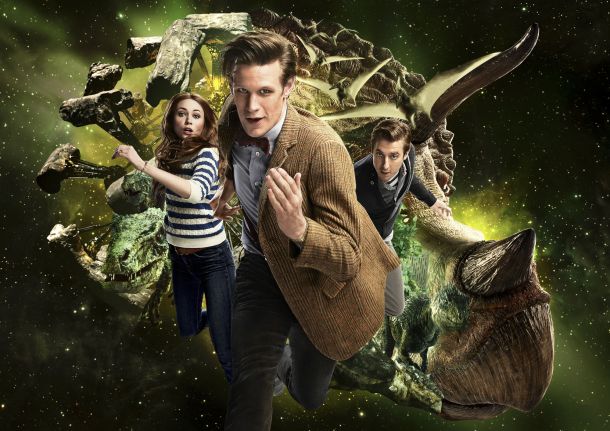 I have to admit, this week’s Doctor Who wasn’t even close to being as terrible as last week’s. It was pretty good, actually. It had all the fun and joy of not only the Davies era, but also the Douglas Adams episodes from the 70s! Snarky robots (voiced by the absolutely brilliant David Mitchell & Robert Webb), dinosaurs, a monster-of-the-week type bad guy, and companions who truly demonstrate that they are extraordinary. Writer Chris Chibnall did a great job, but there were still some stumbling points. Spoilers ahoy, so keep all hands and feet inside the vehicle.

In Dinosaurs on a Spaceship, the Doctor receives a call from the India Space Agency regarding a rogue ship on a collision course with far-future Earth. He realizes what the ship’s cargo is and goes off to collect a posse – Queen Nefertiti, who is already hanging out with him, an African big game hunter from 1912 named John Riddell, and of course his beloved Ponds, who he happens to hijack with Rory’s dad in tow. The ship is full of dinosaurs, with no other traces of life, except for an old and injured space pirate named Solomon, and his two sassy robots. We find out that the ship is actually the Ark (think Noah’s) of the Silurian race, trying to find a new home, but Solomon boarded and made them all “walk the plank”, looking to sell the valuable dino cargo to the highest bidder. With help from his friends, the Doctor once again saves the day. So how did it pan out?

The episode started on shaky ground, with Queen Nefertiti making sexual advances towards the Doctor. For some reason, all of the powerful women referenced in Moff’s era just can’t get enough of that Gallifreyan wiener. I get it, I do, but does it have to be EVERY woman we’re introduced to? That’s just a stretch, even for the Doctor. Nefertiti is played by the beautiful Riann Steele. Whitewashing Nefertiti would have been an unforgivable crime and I’m glad they didn’t step into that territory.

Furthermore, we meet the Indian Space Agency (ISA), a fantastic plot element highlighting the fact that, in the upcoming future, India most likely will have a booming space program, and I believe this was a very thoughtful addition to the episode. Then we have John Riddell (Rupert Graves), a Moffat favorite. Apparently, dinosaurs ARE his division, and so is blatant sexism and being a living symbol of British Colonialism. To put him head to head with an African Queen and pair them romantically, knowing the suffering of the African people at the hands of British Colonialism, was a low blow. Amy’s quip at Riddell about him needing gender politics classes was cute, but also a reminder that Moffat will continue to hold men in higher regard than women on his shows. Riddell was easily my least favorite part of the episode, and I don’t think he was even necessary for the plot.

It’s the Ponds – Amy, Rory, and Rory’s father, Brian “Williams” Pond – who really had the chance to shine in this episode. Amy was smart, resourceful, and feisty (always tell them you’re royalty). Rory was helpful and heroic, and we actually learned things about him that didn’t involve his marriage to Amy: apparently Rory collects medical supplies from other planets and times! His relationship with Brian was lovely, and it was so wonderful to finally meet a parent in the Pond family tree. I think these characters have suffered greatly from the lack of backstory and family history, and while this didn’t right every wrong, it was a great start!

One more thing didn’t sit right with me about this episode, and that is Solomon’s end. I know that the Doctor has committed complete genocide on several occasions, but I can’t remember ever seeing him just outright kill an individual human. While Solomon was a terrible person, obviously, the Doctor I know would have tried to save him and give him another chance, not just send a missile at him and be on his merry way.

So how did you feel about this episode? Please, discuss.

This entry was posted in recaps, television and tagged Chris Chibnall, Colonialism, doctor who, Doctor Who Series 7, Steven Moffat. Bookmark the permalink.

2 Responses to WhoView: “Dinosaurs on a Spaceship”