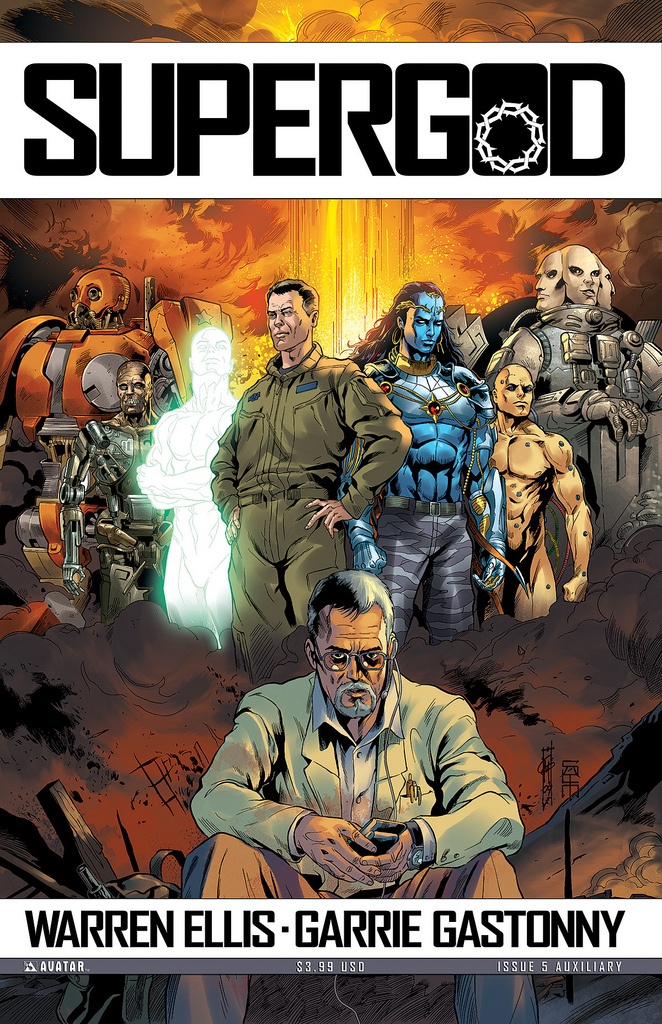 The final installment of Warren Ellis’s “synthetic heroes” series (with previous books being Black Summer and No Hero) wraps up with Supergod (Avatar Press, 2010) by asking “How far would the world go?”

Without giving too much away, the story is set in the 20th century, as the nations of the world with the most firepower create beings who are more than just super humans: they’re truly supergods. Ellis creates an alternative arms race, where super-beings are the bombs that could bring the world together or tear it apart, and the whole prospect is both exciting and terrifying. With the supergods’ powers comes the potential for destruction beyond all imagination.

The interesting thing about Supergod is how this third volume is completely different in style from the preceding two books, not only in art – Garrie Gastonny instead of Juan Jose Ryp – but also in narration. Here we have a single narrator, describing to an unseen party the events of the past 30-plus years, leading us on a story to the present moment and the destruction of Earth. It is a story that’s much darker in tone, which I love when done well.

The book definitely has a good deal of cultural “intersectionality”, as far as drawing on several different mythologies as the narrative unfolds across multiple countries and continents. Ultimately, this is a story of what would happen if the pent-up aggression of the world’s nations have towards one another were to be concentrated into post-human beings. Going completely unchecked, giving a single being in each country all the power, can lead to a situation that escalates into something horrible, as we see happen in this book.

Supergod was a fine ending to Ellis’ trilogy, but I’m definitely ready to move on to something a bit more whimsical. Next week: Scarlet Traces.