Guest contributor Jeff is a Texan, a comic book dork, and a general sci-fi nerd who is engaged in happily educating his teen-aged daughters on the value of brightly illustrated story books where shit blows up, while they educate him on vegetarianism.  He writes elsewhere on the web and about soccer (his other obsession), and you can follow his exploits on Twitter.

While we’ve all dreamed desperate nerdy dreams of opening a forgotten shoe box in Grandpa’s attic and discovering a near mint issue of Action Comics #1, the truth of the matter is that No.1 issues appear on the shelves of our favorite nerderies (def: place to revel in one’s nerd-ness, i.e comics and gaming shops, the Internet, your mom’s basement, etc.) on a weekly basis. The number of new stories and voices in comics is astounding, and a part of what keeps us coming back every week. Sure, we want to keep up with Batman’s challenges of dealing with fatherhood, or follow the prep-schoolers of Morning Glories as they struggle with life and death, but we also want new idols for our geekdom.  One never knows when the next sensation will come down the pipe. So, this spot will serve to fill you in on my impressions on some new No.1’s on a weekly basis, giving us an idea of what’s hitting the shelves. Some of these may end up being mere fanboy fodder, while others might have legitimate depth and value. 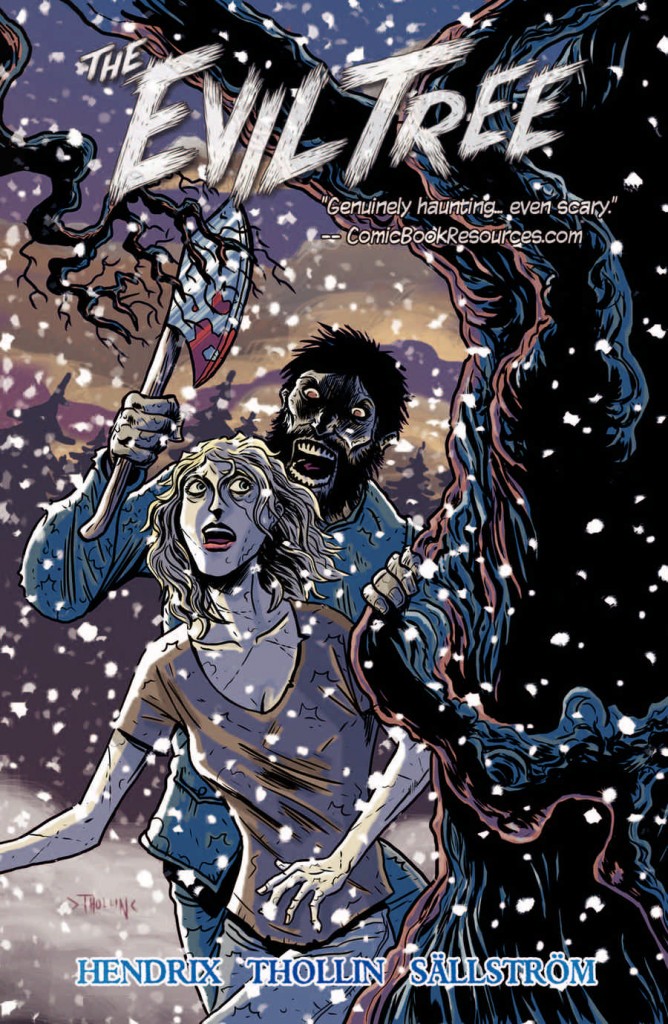 First this week is The Evil Tree #1, from Arcana Comics. Tough to come by in print, but available in its digital format, this little slice of horror comic pie is pretty standard fare. A group of friends of diverse ethnic – and possibly sexual – identities? Check. Gathered together on some sort of outing, getting “away from the city”? Check. One of them, (who of course is the blond female in the little smorgasbord of characters), has been having “a weird feeling”, not to mention horrible dreams with ghosts and men wielding axes in the shadows. Yet, having seen every horror movie ever made, the friends wander off to a cabin in the woods (not THAT one, sadly) and chop wood for a fire, in preparation for a horrible impending snowstorm. Check, check, check. This book really had little to distinguish it from a lot of stock horror stories, and that wasn’t even the worst part. Sadly, it’s just not a very good comic, either. Granted, not every panel of every comic has to contain the word “BANG!” in a balloon, but this book, even with the aforementioned nightmarish beginning, doesn’t have much action at all. Even in stock horror films there is enough creepiness in the background to keep your imagination wound up, and to build tension in the audience. Here, it’s lacking, and the scare tactic ending falls flat because of it. The art is rather Sunday-comics simple as well, making true horrific tension difficult to build. Overall, a dud, in my humble opinion. 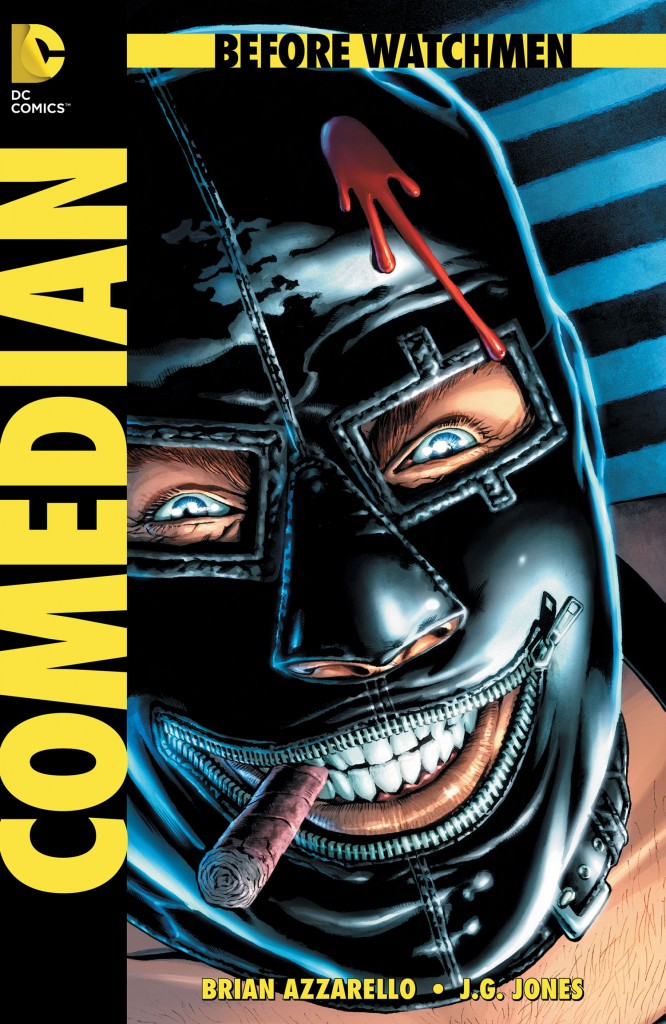 Next up was a No. 1 in a series of new No. 1’s, and the first of these Holy Sacrileges I’ve been yet to thumb through. That’s right, it’s Comedian #1, part of DC Comics Before Watchmen series that explores the backgrounds of the heroes, anti-heroes, and (presumably) villains of the groundbreaking graphic govel (and geek holy relic), Watchmen. Like many others, I was rather skeptical that this should be done at all, but I found it difficult to resist when it came to the Comedian series. In fact, I’ve already passed on the first installments of both The Minutemen and Silk Spectre (the stories are being presented as individual mini-series, with presumably a lot of crossover), but after this issue, I think I’ll be going back to them. The Comedian, one of the most detestable misogynistic ass-wipes ever to grace the comic page, is up to his old tricks here, and so are those who now hold sway over the Watchmen Universe (which is what we now have to call it, I guess), interweaving legitimate political history and satire with the narrative. Of particular interest is the appearance of Jackie “before she was O” Kennedy in a power role that has her channeling a rather nasty Lady MacBeth. Suffice it to say, her setting up the Comedian and Marilyn on a blind date is not exactly a step forward for feminist ideals. Ouch. Overall, a more entertaining and respectful read than I was expecting, and perhaps a prequel series worth diving into.

Sadly, this week was a touch thin in the new stories department and few No. 1 issues graced the shelves on Wednesday. I did pick up Baltimore: Dr. Leskovar’s Remedy #1 (of 2) from Dark Horse Comics. It turned out to be a mini-series extension of a previous story by Mike Mignola, about a WWI-era English Lord and soldier hunting vampires in Eastern Europe. It mostly felt like I should go back and read the first part of the story. So, as a bonus, let’s look at the the best of last week’s crop of No. 1’s, The Massive. 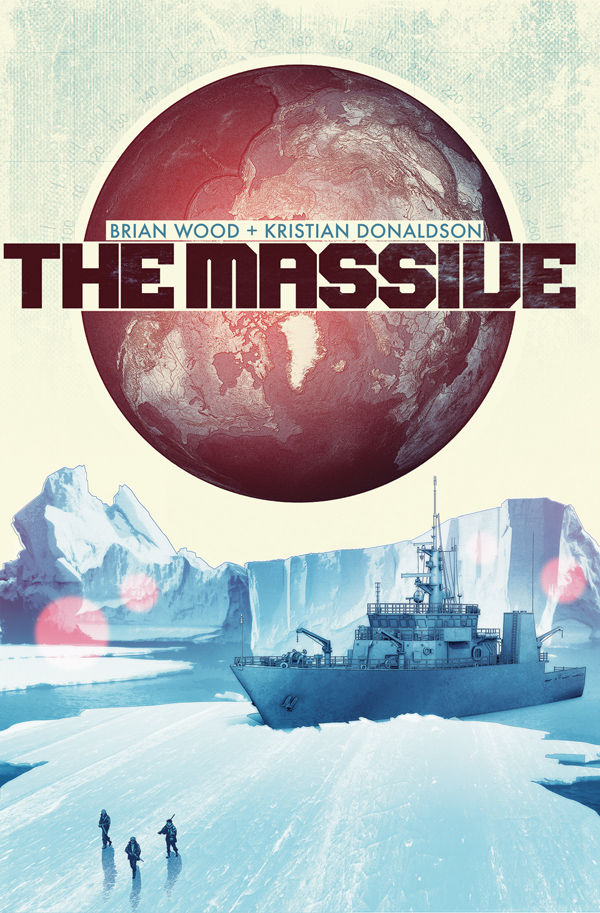 The Massive #1, by Brian Wood (DMZ, X-Men) and Kristian Donaldson is the most interesting thing I’m reading at the moment, I think. Welcome to the Apocalypse, in a way that might actually happen, kiddies. In an undated near future, the Earth has been ravaged by a year-long series of natural catastrophes that have fully destabilized “First- and Third-World governments alike.” The survivors of this particular tale are a band of hard-core environmentalists and ex-mercenaries known as the “Ninth Wave Conservationist Force”. Think Greenpeace meets the A-Team. They are struggling to survive aboard their vessel The Kapital, all the while searching for their sister-ship, The Massive, mysteriously missing just on the edge of radar range. It’s certainly a cautionary environmental tale, but also one that reminds us of the sometimes futile nature of humanity’s grand endeavors. These hippies on the high seas are prepared and capable, in particular the no-nonsense, tough right hand woman Mary. With poise and strength channeling The Walking Dead’s Michonne, she defends her ship, her captain and lover, the wonderfully monikered Callum Israel, against pirates and the elements. The tale of the death of the world, told in washed out flashbacks and “found documents” as an addendum to the comic, provides a theatrical realism that makes the story so much more compelling. It also asks the fundamental question about the value of the planet vs. the value of humanity, and reminds us of the truth that we can’t have one without the other. This is a read I’ll be coming back to, and you should get on board as soon as possible.

Hope that sheds a little light on the items on this weeks shelves, and we’ll see what pops up on Wednesdays to come.