The Avengers, Commercials, and the Gendering of Children’s Toys

Needless to say, I loved The Avengers. It was hard to believe they packed that much awesome in one movie. The action sequences were great, the balance between the different characters was well done, and I particularly enjoyed the touches that bore that unmistakable Joss Whedon stamp. The movie was a testament to what happens when a comic book movie is in the hands of a comic book fan. However, something that stood out happened before the movie even began.

I saw the film twice during opening week, once in 3D and once in 2D. Each time, during the commercials that play before the movie previews, there was the same ad for the retail chain Target:

Viewing this commercial, I was immediately struck by the obvious omission of Black Widow and, indeed, by the lack of any girls at all. The narrative presented in the Target ad was obvious: boys are the only children interested in The Avengers and suitable for playing with Avenger-related toys. The only female shown in the commercial is an adult, a mother in the role of caretaker and guide. A further message conveyed is that the only members of The Avengers that are important are the males. I’ll allow that Black Widow’s plain black jumpsuit doesn’t have the pizzazz of a giant green rage monster, or a star spangled shield, but why not have at least one girl in any one of the costumes?

The narrative in the commercial seemed at odds with the story presented in the movie. In the film, Black Widow appears as much as any of the other main characters, and she plays a vital role throughout the movie. She is strong, capable and behaves in truly heroic fashion. So why did Target choose to leave her out of the commercial? Perhaps her uniform wasn’t thought to be marketable? Was it her weapons? Or was it simply that she is female? I was curious to see what the deal was, so I visited two different Target stores, to check out the layout and content of the toy departments. While there, I unintentionally found myself doing an informal, mini-qualitative research.

I went to the first Target the Friday after The Avengers US opening. It was around 5PM and the store was quite crowded. As I approached the toy department, the division between the “boys” and the “girls” sections was very clearly defined. The section for the girls was covered in pinks and pastels, and filled with all things frilly, sparkly and lacy. There were dolls of all sorts, baby beds, carriages, and miniature kitchen sets – everything for a girl to explore and develop her nurturing side. The Disney aisle was dedicated to princesses of every kind (with all of their related accessories): Snow White, Rapunzel and Tinker Bell dolls and costume sets; a twenty-one piece dress-up trunk; assorted Disney Princess figurine collections; crowns, wigs, toy cell phones, magic wands – anything your girl needs to feel like a real princess! Conversely, the boys’ section was awash in bright primary colors and filled with action oriented items. The shelves were covered with toy cars and trucks, Lego and construction sets, as well as balls, bats and other sports equipments scaled down to fit smaller hands.

The Avengers display was at the very end of the boys section, as far away from the girls toys as it could possibly be. On the floor, green Hulk-sized foot prints led customers to an entire aisle dedicated to toys tied in witht he movie, complete with various Iron Man Masks, Captain America’s Shield, Hawkeye’s Battle Bow, and plastic Mjolnirs, large and small. (The last toy was in a package labeled “Thor’s lightning hammers.” C’mon people, if we’re going to buy our children comic book paraphernalia, let’s educate them in the proper nomenclature. They could have at least called it “Mjolnir, Thor’s Lightning Hammer.” But I digress.) There were various figurines of The Hulk, Iron Man, Captain America and Thor, with a range weapons, uniforms, vehicles and pairings (although surprisingly I saw no Bruce Banner/Hulk pairing, which seemed like a natural to me). There were even several figurines of other comic book characters from the Marvel Universe, ones who had nothing to do with The Avengers movie, including Iron Fist, Daredevil and Sub-Mariner. But, as I searched the shelves, not the slightest hint of Black Widow was to be found: no figurines, no accessories, not even pictures of her on the packaging.

As I walked around looking at the toys, I began to notice how children were behaving. Boys of all ages followed the Hulk footprints, making a beeline for the section. They were enthralled by the smorgasbord of comic book inspired delights before them. Many of the girls headed straight for the girls section, however. One small group of young girls on their own caught my eye. Two six or seven year old girls were shepherded around by an older one, about ten, while their dad was in another section. The younger girls seemed to be a handful, as they were each trying to pick out her own toy, under the older one’s guidance. The older girl tried to keep her sisters in the girls section, pointing out things in their price range they might like. (“How about this mini-Rapunzel doll? You liked that movie, right?”) She had already picked out her own toy, a Disney toy cell phone, so she was clearly getting fed up with her sisters and ready to go. Eventually, the younger girls made their way into the Avengers section, lured by the Hulk footprints. One youngster ran through, not interested at all, with the older girl following trying to keep an eye on her. The remaining girl stopped by the end cap display, just around the corner from me, clearly enchanted by what she saw there. She looked at the bright gold and red Iron Man masks, and the red and blue circles with the big star in the center of the Captain America shield. Reaching tentatively toward the small sized shield, she paused and looked up at me (an adult woman), as if asking permission. I smiled encouragingly at her, and she smiled back and took the shield off the shelf for a closer look. I have no way of knowing if she knew what those items were or if she just liked what she saw, but she clearly knew they were “not for her.” Just as she was getting a closer look at the shield, the girls’ dad came up and told them all if they wanted to buy a toy, they’d better get back to the other section. The girl quickly looked down, hung the shield back on the shelf and walked back to the “other section.” The message seemed clear: if the girls wanted to bring home a toy, they needed to select something the father thought was appropriate for their gender. 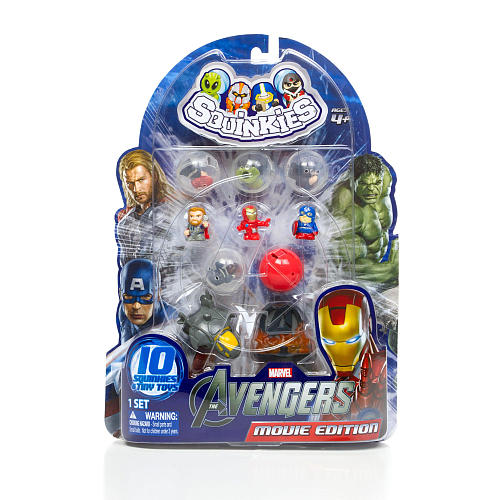 I went to check out another Target the following Tuesday. The layout of the toy section was much the same as the first store. It was later in the evening, so the store was far less busy. This time, I only shared the section with one other group – a father with two sons, three and five, who seemed to be buying a gift for their mom. This was obviously a proud geek family. The five year old walked down the aisle pointing at action figures and accessories, naming them one by one. I smiled as the boy made a particularly obscure reference for a five year old and complimented the dad on his son’s knowledge. “Oh, that’s my doing,” the dad said, as he grinned sheepishly. “Basic life skills,” I joked. I continued on, looking at the toys, and as I turned the corner to the next aisle, I was surprised to see that this store had some toys that the previous one didn’t. I saw some tiny figures. Did one have red hair? Could it be? I squinted. Yes, in a package of what looked to be little toys like the ones that come from a gumball machine, was a complete Avengers movie figurine set.

What I had before me was a set of Squinkies and, honestly, I had no idea what they were. Some tiny figurines were in plastic spheres, looking like they might be the kind that expand in water. Obviously, I needed to talk to an expert. I asked the father if I could ask his son about the Squinkies. The five year old told me that Squinkies are toys, “small, kinda fun, sorta squishy and you can sorta play with them.” When I asked if he would pick this toy out of all the other toys, he just shrugged. 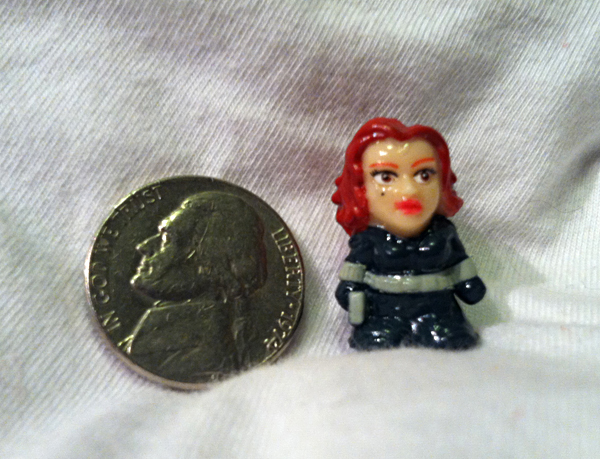 Really, is that all there is?

So, the only evidence of Black Widow I saw in the toy section of two different Target stores was one tiny figurine that was a part of a larger set. No featured regular action figures (even when other unrelated Marvel characters were there), no Black Widow accessories. Just one nickel-sized figurine that looks like a piece of fancy gummy candy.

The gendering of children’s toys is nothing new: venture into the toy section of any store to see that this is the case. The stark segregation between the “boys” and the “girls” sections, and the difference in the toys therein, is obvious. The Target commercial referenced her just reinforces messages about gender norms in American society that both children and adults receive every day. It’s confusing: forty percent of the record-setting opening weekend audience was female. Disney, Marvel’s parent company, made a specific effort to market the movie to females by showing Avengers commercials during such television shows as The View. Yet, somehow, Target was clearly targeting (no pun intended) the film merchandise only to boys.

I recognize the danger of anecdotal reasoning, but while the scenarios I witnessed may not be universal, the evidence is still striking. Will we see a new round of “Star Wars Katies,” girls who are made to feel ashamed and bullied because they dare go against the norm and play with these toys? What will a girl, inspired by the strong, exciting character she saw on that big screen, think when she goes to Target seeking Black Widow toys? To think of that inevitable disappointment saddens and frustrates me.

To further the point, why do the Thor, Iron Man, Captain America and Hulk toys have to be just for boys? If I were a child today, I’d be dying to get my own Mjolnir, just because it’s cool. (When I was a young girl, I loved Spiderman, and I made my own imaginary web-shooters by putting drinking straws in my sleeves – the old school way.) There is no need for toys to be segregated by gender: all that should matter is the amount of fun a child will have playing with the toys. The messages children get are meaningful, indeed, and they’re meaningful to us all. With the strong female audience, as evidenced by the numbers from the opening weekend, and with plans to add another female to the team for the sequel, I can only hope that will be a different message by the time we see The Avengers 2.

An enthusiastic geek who loves sci-fi and comic books, Nicole also has a background in education policy and leadership and psychology. Some of her other writing can be found at ScienceFiction.com and you can say hello to her on Twitter.
View all posts by Nicole Wander →
This entry was posted in film, guest post and tagged children, feminism, the avengers, toys. Bookmark the permalink.

14 Responses to The Avengers, Commercials, and the Gendering of Children’s Toys