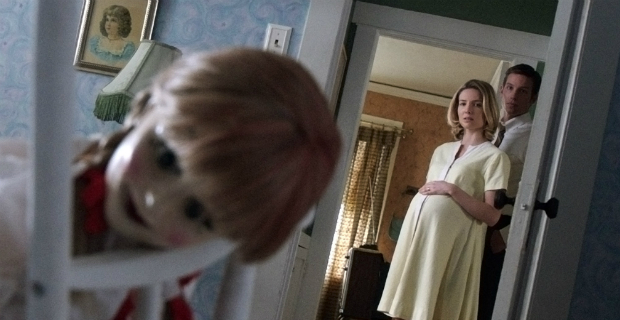 This doll is going to kill you. (via Screenrant)

Snap Synopsis: That scary ass doll from The Conjuring got her own movie. Fuck everything.
“Oh, SHIT!” Moments: Everything.
Trigger Warnings: Violence against a pregnant woman.

Like clowns, dolls are a common thing that makes people uncomfortable and creeped out. It’s hard to pinpoint why exactly, seeing that both clowns and dolls supposed to delight and even comfort children (although who thought of that, really?). We all know that this is a filthy lie perpetuated by the agents of evil: just ask the countless millennials who still shudder at the mention of Chucky.

Fans of 2013 haunted house flick The Conjuring would immediately recognize the opening seconds of the trailer for Annabelle, based on some brief references in the earlier film. Although not a direct prequel, the two movies are loosely connected by their real life inspiration, paranormal investigators Ed and Lorraine Warren. (Fun fact: the Annabelle doll is an actual item that’s housed in their Occult Museum. Nothing could possibly go wrong.)

Annabelle opens on an idyllic note in the seemingly tranquil 70s, even with the Manson Family murders and an atmosphere of civil unrest and discontent brewing in the nation. Mia and John (yes, like in Rosemary’s Baby) are a young, fresh faced couple, just ripe with the promise of the American Dream (doubly so for the pregnant Mia). Unfortunately for our young lovebirds, their burgeoning life in Suburban America is shattered when their next door neighbors are murdered in bed by their estranged daughter – who conveniently joined a Satanic cult – and her boyfriend. It’s a terribly traumatic event that Mia and John barely manage to escape from with their lives. Unlike most horror characters who should know better, the young couple are smart and decide to move out of their house. But like all horror movie protagonists, the bad ju-ju that’s now fixated on them follows in the form of a hideous looking collectible doll that John had so thoughtfully gifted to his wife earlier.

Viewers expecting to get their scares from the doll’s physical antics, a la Chucky, shouldn’t hold their breath. While the doll’s rough, macabre appearance make your eyes skitter away in discomfort, and spooky things do occur around the doll, Annabelle’s “Gotcha!” moments are derived from the film’s claustrophobic atmosphere and an external (demonic) presence. Actress Annabelle Wallis does the heavy lifting in this film, playing a new mother who is trying to come to terms with a lot: dealing with a traumatic assault, learning to care for a newborn, and fighting the devil, quite literally. All of this happens to Mia when she’s by herself within the four walls of her enviably spacious apartment. Just remember kids – when the scary things are happening inside the home, there are only so many places you can run. Fortunately, Annabelle avoids recycling the same background and manages to keep the scares coming, aplenty and fresh. (A particularly terrifying sequence will put elevators on the list of things to be scared of.)

I’ll admit that my fear, which translates to enjoyment in horror, was driven by my preexisting discomfort around dolls; my lowered threshold for scares made this movie more enjoyable for me than it would be for others with a more critical eye. That being said, Annabelle does have some shortcomings that limit the film. I was surprised, for instance, at how little the movie delved into any background for the presence that is haunting Mia. In fact, as far as demonic entities go, Annabelle is very bare bones, with little to no research or attempts at problem solving. Just why should we be fearful of this evil presence? And if Mia is all that scared for her baby, why isn’t she more aggressively seeking a way to fix it?

Another point of contention was the disappointingly minimal role Alfre Woodard is relegated to. In addition to very marginal portion of screentime, she also plays a really hackneyed trope. It should be noted that Woodard is an Oscar nominee, in addition to winning numerous Emmys and Golden Globe awards, so it’s a shame that an actress as of such talent has to play second fiddle. More dialogue could have done wonders for her character and the movie, overall.

If you’re looking to reawaken your fear of dolls and you enjoy a good possession/evil demonic entity film, Annabelle is the flick for you. Just don’t take elevators for a while. And don’t look behind you on stairwells.

Lois gives it: Two thumbs up, the second one mostly for some serious apartment envy.

This entry was posted in film reviews, horror and tagged annabelle, horror movie, the conjuring. Bookmark the permalink.