(This is part of Lois’ The Psyche of the Revenge Film review series.)

Without waxing sentimental, let’s acknowledge that teachers have a long term impact on our upbringing and adult character. Sometimes, though, horrible people can hold such positions of authority over tender young psyches. Many of us have had some horrendous nightmare of a teacher who still gets our hackles up when we think about them. We wish that we could have told them off in some spectacularly snarky manner, but mostly we just walk away after graduation and revisit the past as a humorous talking point over drinks with friends. In Dae-wung Lim’s 2006 horror film Bloody Reunion (or To Sir with Love, the original title in all of its intended irony), one student waits for over a decade to exact revenge for a childhood of humiliation at the hands of someone who was supposed to be a benevolent adult. (TW for a bloody film poster, and references to suicide, abuse and violence ahead.) 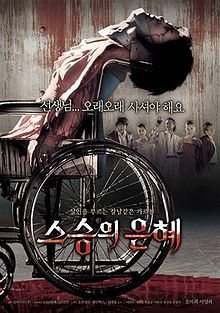 While not one of the best revenge movies in terms of gore and plot continuity, Bloody Reunion is a good starter movie in the genre, with its less obvious approach to the revenge plot, and the heightened sense of tension throughout the various murders.

In a Confucian value-based culture, teachers are some of the most highly respected members of society; they are granted as much respect and authority as parents, lavished with gifts and praise, and given total autonomy in the classroom – especially when it comes to disciplining their students. Although physical discipline has since been outright banned (for good reason), we know that power trips can manifest in a lot of ugly, abusive ways that don’t require fists.

In a grisly discovery in a retired schoolteacher’s basement, police find savagely mutilated corpses and two survivors: Miss Park, the teacher, and a young woman named Mi-Ja, her live-in caretaker. Miss Park, who suffers from a neurological disease that has left her paraplegic, once had a husband and a severely disfigured son. She hid her son in the basement for most of his life, something that can be seen as a clue to the kind of person she is. 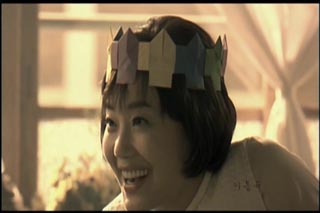 Because Korean society shuns its disabled citizens, Miss Park’s husband, unable to handle the shame, committed suicide. At this point in her long life, Miss Park has been left alone with no friends or family, as her son disappeared years ago and her students have forgotten her; that is, all her students, except for the angelic Mi-Ja (played by my favorite Yeong-Hie Seo, who was also in gutwrencher Bedevilled). Mi-Ja lives with Miss Park and makes sure that she is fed, bathed, taken care of and always comfortable. 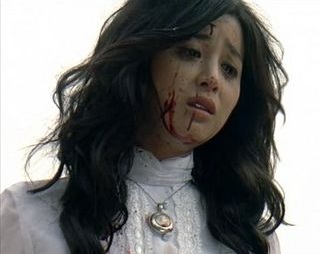 Mi-Ja recounts a strange and tense tale to the police: she thought she’d do something to boost Miss Park’s morale by throwing together a reunion with her elementary class. Out of the entire class though, only six – not including Mi-Ja – decided to attend: Sun-hee, a girl who was fat while in school and now shows up sporting giant sunglasses, heavily in debt from constant plastic surgery; Myung-Ho, a cute boy who Miss Park may have molested; Eun-Young, who was class Vice President and came from a poor family; Eun-Young’s fiancé Se-Ho, who was class President; Dal-Bong, a once-promising athlete who lost his shot at going pro due to an injury caused by Miss Park; and Jung-Won, a kid who dropped out after he was humiliated for defecating his pants in class. 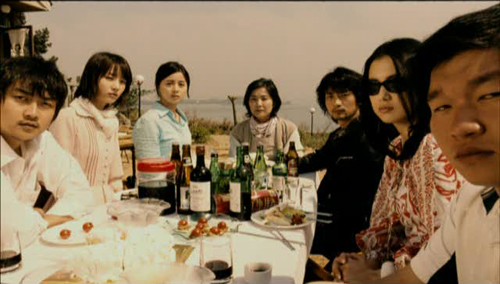 It could be argued that a teacher’s success is measured by the lives and careers her students go on to lead. To Miss Park’s disappointment, the students that show up at her door aren’t success stories but broken misfits and failures – and all their shortcomings in life lead back to Miss Park. As the film progresses, we see that Miss Park’s students’ memories of their elementary class are at extreme odds with their teacher’s own sunny recollections of the past. She thought she’d provided her students with beautiful, formative childhoods. The students recollect cruelty, ridicule and humiliation. No one at this class reunion has arrived with good intentions, so when a killer in a bunny mask starts offing people, it’s a natural assumption that it’s one of the classmates gone rogue, ensuring that Miss Park gets her final comeuppance. 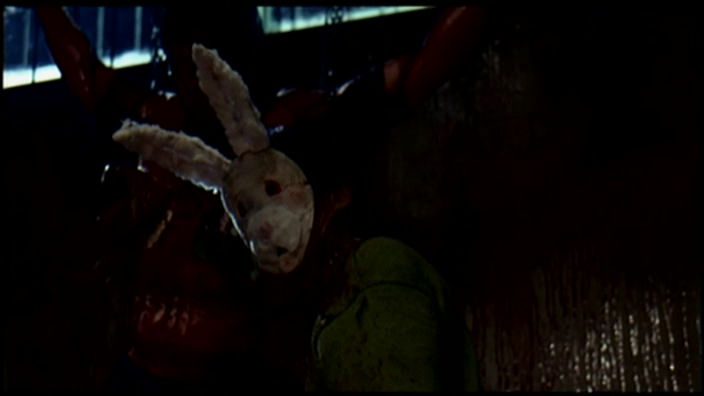 I’ll spare you the spoilers on the “whodunnit” of Bloody Reunion, but our Bunny Killer’s motivations should be mapped out. Childhood and adolescence are tumultuous periods in life, even without any sort of external forces at play. Add puberty, bullying from peers, and pressure in school and from parents, and you get a volatile mess of emotion, just waiting to erupt. Throughout it all, there is a trust that your teachers would be a supportive presence in your life. Realizing that’s not always the case can be a shock.

It’s always jarring when you admit to yourself that parents are people with faults and flaws, people you might not always like (and odder still when we realize the same could be said of their feelings towards you). While not on the same scale, the feeling is similar when you discover that your teachers aren’t obligated to like you, despite their profession. Yet, we put implicit trust in our teachers, all while not knowing much about who they are as people. It is assumed that they will remain calm and objective, instead of petty or begrudging when handling conflict involving their students. When a child becomes an unfair target of a teacher’s dislike, it goes against what feels like a natural order, or instinct even. Worse still is that the playing field isn’t even for children, because as the authority, the teacher holds all the power in this dynamic. Any sort of bullying from a teacher is abuse, plain and simple.

As Bloody Reunion continues to reveal more of Miss Park’s CV, the viewer is hard pressed not to hate her; all the humiliation and anguish her students suffered at her hands could barely be endured by adults, much less children. So then, what would be the best way to take revenge on such a person, when they have nothing left to lose? In the case of Bloody Reunion, that revenge is served up cold after years of meticulous planning, the student now giving the teacher and abuser the ultimate lesson while they’re unable to do anything but watch.

This entry was posted in film reviews, the psyche of the revenge film and tagged bloody reunion, korean horror, to sir with love, Yeong-Hie Seo. Bookmark the permalink.