Deliver Us From Evil (and Fake Bronx Accents)

Buddy cops, except not.
Photo courtesy of The Verge

There’s nothing quite like an exorcism movie, combining the best elements of different horror sub-genres: the spookiness of a supernatural flick and the grotesque body horror. Although naysayers may call them tired and cliche, it’s hard to deny that exorcism flicks are capable of triggering Pavlovian reactions of discomfort in us, no matter how familiar we are with the tropes.

Deliver Us From Evil doesn’t reinvent the wheel of exorcism movies, but it’s entertaining – and more importantly, scary – enough. NYPD Sergeant Ralph Sarchie (a wonderfully graying Eric Bana) has a special “radar” for sniffing out particularly bad juju, and what should have been a routine domestic violence call one night puts him on a trail of something far more sinister, something that decides to follow him home. 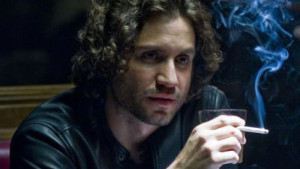 The movie has all the requisite signs to get you keyed up and up the creepiness factor: flies, flickering lights and static whenever Ralph steps into a suspicious area, broken Crucifixes, and even an instance of a subverted lion’s den situation. As a macho tough guy from the Bronx and a lapsed Catholic, Sarchie is slow to admit that something clearly supernatural is underfoot, but the good Father Mendoza (Edgar Ramirez) is there to guide him with his soulful, troubled eyes and leather jackets and beanies, like a modern day Jon Snow. He’s also very important to the movie, ’cause, you know, he’s a Priest.

You won’t find any women in Deliver Us From Evil, aside from Bad Mothers who murder children or fail to protect them, or Suffering Mothers who are pregnant and just want their husbands to really be present when they’re home, but this isn’t really anything new. To be frank, I found Eric Bana and Olivia Munn’s (who plays Sarchie’s quietly enduring wife, Jennifer) terrible fake Bronx-Italian accents to be more offensive. “Of course we do, we’re Eye-taliannn!”

On a more serious note, I found it curious that depictions of the possessed body had none of the bodily contortions and convulsions that accompany the usual exorcism, and I’m willing to wager that it’s because the body in question was male. Let’s be honest – exorcism scenes involve a lot of thrashing, writhing female bodies in thin white nightgowns, possibly because they could be interpreted as a metaphor for how frightening female sexuality is, and most definitely because of the Male Gaze. While the possessed body here is supernaturally strong and fast, it’s never depicted in the same manner as possessed women usually are in these types of films.

All in all, this is a run-of-the-mill exorcism movie that still has plenty of jumps and scares, good for a rainy night in. Just don’t buy creepy stuffed animals afterwards.

Fuck this.
Photo courtesy of Joblo

Lois gives it: one thumb’s up.