Now Was That So Hard? The Highlights of Haywire

I had the pleasure of seeing “Haywire” this weekend, Steven Soderbergh’s latest spy-fi action film. It was an interesting blend of 60s spy films and 70s action movies with beautiful, slow shots and a very mod-influenced soundtrack. The film’s protagonist is Mallory Kane (Gina Carano), an ex-Marine who has made a name for herself working for her ex (Ewan McGregor) as a soldier-for-hire. When a new assignment turns out to be a set-up meant to take her out of the picture, Mallory goes rogue, fighting for her life and trying to find some answers in a rush against time. While the premise is fairly standard action movie fare, Soderbergh got certain things right when it comes to some pet peeves shared by many women who love action films, comics, video games, and lady heroes in general.

It is inspiring in and of itself that Soderbergh wanted to build a movie around Gina Carano, a Champion MMA fighter. Mallory is a trained fighter and killer, who knows how to handle a gun and her punches. By building this role around Carano instead of treating us to yet another “waif-fu” film, Soderbergh makes waves showing that you can still have a gorgeous woman who also looks like a fighter, someone who can take a punch. 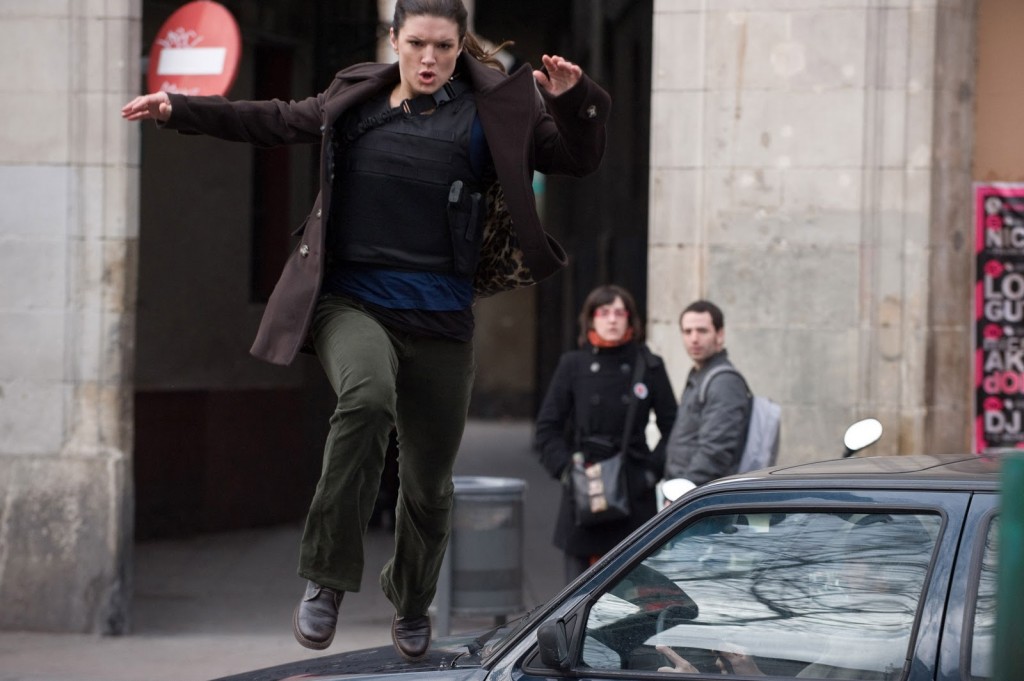 Even more exciting for me was Mallory’s costuming, which was PERFECT. The design and wardrobe styling are the work of Shoshana Rubin, who has previously worked with Soderbergh on other projects (Solaris, Ocean’s Eleven, Traffic). Soderbergh said of the styling decisions, “We wanted everybody to look good, especially Gina, but we also had a lot of discussions about what kind of clothes these people really wear when they go out on jobs.” (Popular Celebz Haywire feature)

Among the realistic and practical wardrobe choices for Mallory were flat shoes, a leather jacket that zipped all the way up (protecting her sternum), and pants made of cotton instead of latex. Her hair was tied up in a scarf or hat when long, or put up in cornrows when it was short. This kept the hair out of her face and secured so that no one could grab it. When Mallory took off her heels before entering a hotel room and expecting a fight, I cheered a little. It was so exciting to see a woman going into battle in clothing MADE FOR BATTLE.

The sad part? That this warrants excitement. Shouldn’t this be the norm? I know that video games and comic books are escapism, but is it so wrong that my escapist fantasy should also include practicality? I would love it if comic book artists, video game designers, and directors – Joss Whedon, for instance – would take a look at this movie and see how you can still have a sexy, beautiful woman who is strong, muscled, and practical. While it isn’t the best movie I’ve seen recently, by far, I enjoyed Haywire a lot because it gave me what I’ve been wanting for so long: a believable female action hero.

1 Response to Now Was That So Hard? The Highlights of Haywire