The Psyche of the Revenge Film: A Series by Lois Payne

Here’s a bit of trivia about yours truly: my Netflix queue is stocked with revenge and horror films. There’s nothing quite as cathartic at the end of a bad day like retreating into my room and watching a movie where people get eaten, hacked apart, or majorly damaged in some way, as an act of vengeance. When I ran a list of potential revenge horror movie reviews by Tanya, laughingly saying that I seem to have a subconscious preoccupation with the genre, she pointed out that maybe this is something I should explore.

I am definitely fixated on the revenge film as a genre, which is even more evident when I put together movie recommendation lists (solicited or not). It’s a very noticeable theme with me, and the category is usually dominated by films from South Korea. In my opinion, as an amateur film buff, revenge films from specific regions are pretty indicative of the underlying national psyche. Obviously, this isn’t an entirely original observation, that filmmakers are influenced by their environments and life experiences, but it’s just another aspect of these movies that for me seems worth exploring. Thus, I am embarking on a series of reviews to explore the themes and inspirations behind revenge films, and through writing these, I might uncover what motivates me as a viewer to keep watching these films.

In putting together the list of movies to review, I am going to keep a few parameters in mind to help narrow the focus.

First, I’m going to try and keep to movies with a certain “human touch.” I’m really into horror movies that involve the paranormal, and it’s a given that in the majority of supernatural movies, revenge is the motivating factor for the hauntings, etc. I’m going to to try and branch out beyond my genre preference and try to also look at some revenge movies that focus on the psychological motivations behind revenge – the base needs, desires, and emotions, without necessarily involving the supernatural.

Most of these movies are probably going to center around women, because I’m biased and women just dominate everything. Plus, there’s a lot to be discussed about the psychology of women and vengeance.

Speaking about the act of revenge itself, it should be a premeditated reaction, not some cosmic accident setting wrongs right.

When I say “Asian,” it’s not as a blanket term for all things Eastern; my “Asian” films are from South Korea, unless specified otherwise. 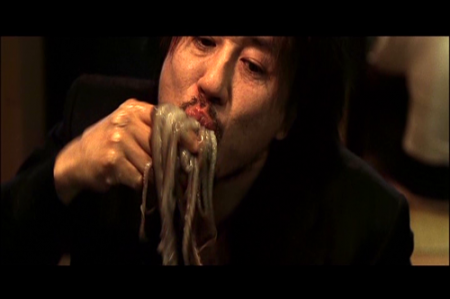 Revenge is a dish best served cold. Like octopus.

So far, this is the list of movies I plan on reviewing:

Have a title that I should absolutely add to this list? Let me know and I’ll see if it’s a viable option.

Coming up first for review: Arang, and the Confucian-Catholic dichotomy in this intense movie.

This entry was posted in film, the psyche of the revenge film and tagged horror movies, revenge movies. Bookmark the permalink.

5 Responses to The Psyche of the Revenge Film: A Series by Lois Payne