Science fiction and fantasy shows don’t number as many as sitcoms, comedies, crime dramas, or reality shows, and they usually don’t last as long. So I’m pleasantly surprised when I see that these shows have more queer characters than the rest of them, and they are usually more prominent characters.

Earlier, I dissected GLAAD’s yearly “Where We Are on TV” report , which examines LGBT representation in television. There were 53 lesbian, gay or bisexual characters counted on scripted television in the 2011-2012 season, which isn’t much at 2.9% of all characters. However, consider the fact that of those 53 characters, 14 were on science fiction and fantasy shows. That is 26% just from this genre. Out of the whole list of 53 LGB characters on all television, 10 (5.4%) are labeled bisexual and 4 of them are from genre shows. There are even more bisexual characters that aren’t listed, including Bo from Lost Girl, Cara in Legend of the Seeker, Helena G. Wells from Warehouse 13, and some recurring characters on Torchwood and Doctor Who. These characters come out on the show, so there could be even more queer characters that we haven’t even considered. 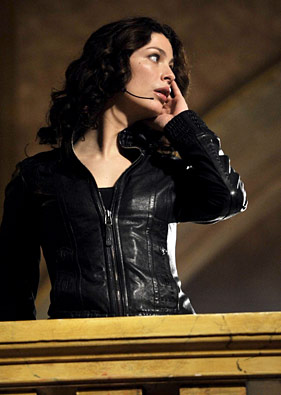 Joanne Kelly, who plays Myka Bering on Warehouse 13, says her character fell in love with Helena Wells several times. Most viewers aren ‘t likely to watch the ComicCon panels on YouTube, or to read interviews on i09, and if it’s not in the script, the character supposedly can’t be claimed. Eric Northman on True Blood had sex with a man and has hinted that it wasn’t his first time, yet he isn’t counted on GLAAD’s report of LGBT characters either. So, doesn’t that count as representation? (I would vote for Myka and Eric on any kind of list, just because they’re great characters.) Regardless of number, I think sci fi and fantasy have the kind of queer representation we want to see more. The genres represent what the real world should be like: being gay or bi is not a big deal.

Glee has had some of the most touching coming out stories of any show on television today, but everything around the stories is painted with stereotypical jokes that didn’t get a laugh from me when they were on Will & Grace a decade ago. “Ha ha,” lesbians play softball, and gay dudes wear bow ties: we get it. There is a way to be funny and have queer characters, without actually making jokes about queer stereotypes. This is where sci-fi/fantasy gets it right. In a touching farewell scene of Doctor Who, Captain Jack Harkness kisses Rose Tyler goodbye, and then plants a kiss on The Doctor, and we laugh at the surprise, because we thought Jack only liked Rose, and that’s it. Steve Jinks comes out to straight-guy Pete on Warehouse 13, and Pete takes off his shirt to show Jinks his muscles, and we laugh because it’s so over the top and so Pete, and that’s it. Genre series can be funny and be inclusive, and they can bring attention to discrimination without it being made to be “very special”. 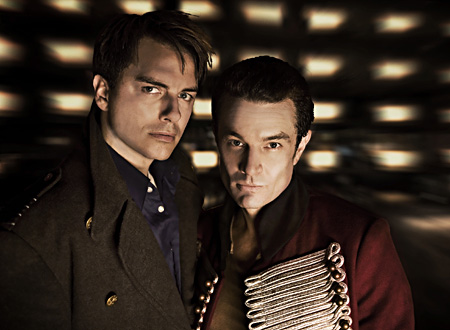 It was obvious that True Blood began as an allegory of discrimination and acceptance toward gay people. The opening credits flash to “God Hates Fangs” on a church marquee, and the first two seasons showed the ongoing process of securing vampires’ rights. So perhaps all science fiction/fantasy shows have, as an undercurrent, the lesson of accepting yourself and others, whether it’s accepting your friends who have superpowers or accepting their sexual orientations. Or, perhaps, shows are trying to tell audiences that we shouldn’t label people at all, like when Jack Harkness quips in Torchwood about humans and their “quaint little categories” for sexuality.

But why are there more LGB characters in sci-fi and fantasy TV? Maybe it’s because audiences are already suspending their disbelief as they are watching magic or space ships, so they care less that show leads are gay. Maybe queer showrunners and writers create these characters, and they don’t care what people have to say. It could be any of these things, all of these things, or none of them, but it’s what makes us keep supporting science-fiction and fantasy shows because they are more progressive in the number of LGB characters and in the way they are represented.

Karly is a geek who works at a bookstore in the Midwest, where she obsesses over sci-fi/fantasy books and TV with her coworkers, and spends the other time thinking about LGBT rights and representation in media. You can follow her on Twitter, where she live-tweets all the TV she’s watching and some other important things.
View all posts by Karly →
This entry was posted in guest post, television and tagged doctor who, film, lgb, lgbt, queer characters, television, torchwood, warehouse 13. Bookmark the permalink.

3 Responses to LGB Characters in Sci-Fi and Fantasy TV